The Veronicas: We Could Get Used to This

Note: this feature was based on my first in-person interview, way back in 2005. — bk 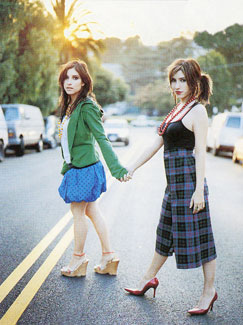 Yes, they’re a pop group. But with a sound that owes more to Veruca Salt than to Madonna, identical twins Jess and Lisa Origliasso lead The Veronicas — and their fans — down a rocky path. Will their success steer teen pop toward rock? “We hope so,” says Jess. “Growing up, we listened to AC/DC, Skyhooks, INXS.”

Yes, some songwriting credits on The Secret Life of the Veronicas will seem familiar to readers of Backstreet Boys album liner notes. But Jess and Lisa first established their credibility as songwriters. “We wrote two singles used on the Australian Idol TV show. We actually got a publishing deal before a recording deal,” explains Lisa. “From that we got an advance, and used the money to travel” and collaborate on songwriting with other artists. Jess and/or Lisa wrote/cowrote nine of the album’s twelve tracks.

Yes, they’re freshly scrubbed and adorable, a marketer’s dream. But there’s sly wit behind the packaging. When asked about “Secret,” a melodramatic track with the line, “I never looked at you that way / ’cause I always thought you were gay,” they laughed. Then Jess replied, “I read an article in a magazine about how guys pretend to be gay to get girls, saying ‘you’ve switched me, and now I’m in love with you’ or some crap. It was so funny; it got us thinking, so we wrote a song.” 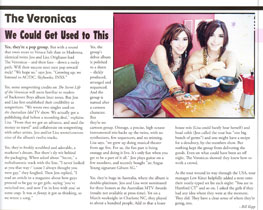 Yes, the group’s debut album is polished to a sheen — slickly produced, arranged and sequenced. And the group is named after a cartoon character. But they’re no cartoon group. Onstage, a precise, high octane instrumental trio backs up the twins, with no synthesizers, few sequencers, and no miming. Lisa says, “we grew up doing musical theater from age five. For us, the fun part is being onstage and doing it live. It’s only fun when you get to be a part of it all.” Jess plays guitar on a few numbers, and recently bought “an Angus Young signature Gibson SG.”

Yes, they’re huge in Australia, where the album is double-platinum. Jess and Lisa were nominated for three honors at the Australian MTV Awards (results not available at press time). Yet on a March weeknight in Charlotte NC, they played to about a hundred people. Add to that a lousy house mix (Lisa could barely hear herself) and head colds (Jess called the tour bus “one big bunch of germs”) and one might have a recipe for a desultory, by-the-numbers show. But nothing kept the group from delivering the goods. Even on what could have been an off night, The Veronicas showed they knew how to work a crowd.

As the tour wound its way through the USA, tour manager Lew Kiner helpfully added a note onto their neatly-typed set list each night: “You are in Hartford CT” and so on. I asked the girls if they had any idea where they were at the moment. They did. They have a clear sense of where they’re going, too. 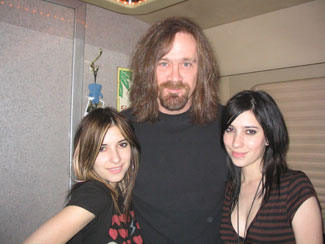