Joe Satriani: Pushing the Limits of the Human Experience 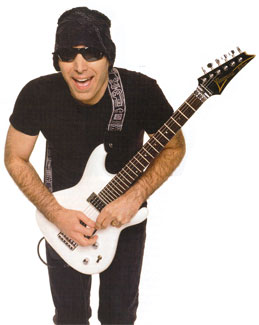 On his new disc, Super Colossal, the originator of the Pitch Axis Theory continues his tradition of combining mind-melting feats of guitar pyrotechnics with memorable riffs and ear-candy melodies. Yet Joe Satriani always tries to go somewhere new. “On this record, once I had the title track, it gave me — in my own mind — a little artistic license to include songs that were about all sorts of different things. They could be straight up rockers; they could be about serious subjects; about fantasy; just about anything. Once that door was open, I felt like I had this extra room to create more interesting guitar sounds, groovier groove, and an overall better sounding record. Without it having to be directed in only one music style.”

In a live setting, Super Colossal‘s “Made of Tears” is extended into a ten-minute-plus workout that evokes the best work of another virtuoso, Frank Zappa. “I remember seeing Frank a few times, and always really enjoying when the music got simple. He would improvise on top of it. Those were my favorite Frank Zappa moments,” Joe admits. “I was never very much impressed with ‘intense’ arrangements, because they’re rather intellectual: you get a piece of paper out, you put a bunch of dots on it, and you hire someone and say, ‘play that!'” Satriani explains with a chuckle.

Satriani gets philosophical for a moment. “It’s the personal performance — right on the edge — that is what we as human beings truly seek out. We wanna see somebody, whether they’re playing guitar, playing a trumpet, holding a tennis racquet, or on a snowboard…we want to see somebody take themselves to the limit of their own human experience. I don’t know why we’re like that — maybe we live vicariously.”

I was never very much impressed with ‘intense’ arrangements: you get a piece of paper out, you put a bunch of dots on it, and you hire someone and say, ‘play that!’
–Joe Satriani

On the new album Joe offers a way for fans and performers to share in that human experience. “One of the things we used to always mention to each other backstage was how certain audiences were really good about listening, and yelling back right in pitch, while others would just sort of scream and yell. I started thinking about [Gary Glitter’s] ‘Rock & Roll Part 2,’ and Queen’s ‘We Will Rock You,’ and thought, ‘maybe there’s a space for my own version of that.'”

That led to the new disc’s closing track, “Crowd Chant.” Joe says, “I started playing a variation of this classical piece that I’ve loved for many years [Gabriel Faure’s ‘Pavane’]. So we invited about 35 friends over to the studio…” Satriani primed them for their performance, and gave them their motivation. “We had some pizza and beer, and then we went into the studio and I said, ‘What you guys are is an unruly crowd!’ We recorded ten passes, so we ended up with 350 vocal parts. There were about seven to ten musicians in the ‘audience,’ and they were really good about hitting the notes. We had some kids, and people who are friends, and they just whistled or yelled. It was fun. And now it’s become this great, end-of-show encore.” 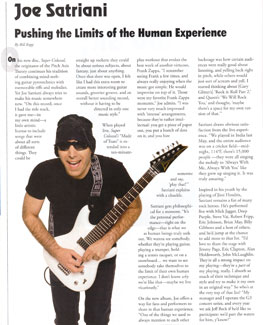 Satriani draws obvious satisfaction from the live experience. “We played in India last May, and the entire audience of a cricket field — midnight, 114°F, there’s 15,000 people — they were all singing the melody to ‘Always With Me, Always With You’ like they grew up singing it. It was truly amazing.”

Inspired in his youth by the playing of Jimi Hendrix, Satriani remains a fan of many rock heroes. He’s performed live with Mick Jagger, Deep Purple, Steve Vai, Robert Fripp, Eric Johnson, Brian May, Billy Gibbons and a host of others. But he’d jump at the chance to add to that list. “I’d love to share the stage with Jimmy Page, Eric Clapton, Allan Holdsworth, John McLaughlin. They’re all a strong impact on my playing; they’re a part of my playing, really. I absorb so much of their technique and style and try to make it my own in an original way.” So who’s at the very top of that list? “My manager and I operate the G3 concert series, and every year we ask Jeff Beck if he’d like to participate; we’d part the waters for him, y’know?”