Thirty minutes into an interview that has covered the creative process, motivation for songwriting, and the difference between recording and performing live, Rutherford NJ-based singer songwriter Stacie Rose turns the tables. She asks me a question: “So, do you like the new record, by the way?” I’m so taken aback that I ask her to repeat the question. 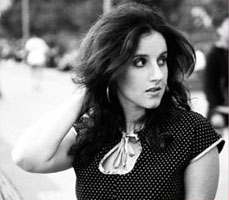 In an age where music is so often product, where market research dictates the “artistic” direction in which an artist must go, when performers are surrounded by sycophants who help them believe they can do no wrong, it’s refreshing almost beyond description to be presented with such a question. Stacie Rose’s second CD, the self-released Shadow & Splendor makes little pretense to be something it is not. Stylistically Rose is somewhat all over the map: a bit of C&W influence here, a nod to current pop styles, some acoustic folk-rock there.

Yet throughout, her vision is unerring: musically the album goes everywhere Stacie Rose wants it to, and nowhere she doesn’t. As both artist and producer, she has made decisions that she felt benefited the overall project. For example, while she’s a fine guitarist, she ceded duties to her bandmates for the album, allowing her to concentrate on vocals and the bigger picture.

The album opener, “Consider Me,” is the most commercially viable of the fourteen tunes, and that’s saying something. Rose allows the chorus lyrics to skitter over the melody in a hypnotic, alluring melisma. And the sole cover (a reinvention of U2’s “New Year’s Day”) can make one forget the original for the moment. “Okay” kicks off perilously close to teen pop, but then the curtain opens to reveal a catchy, fully formed rock/pop song that ranks among the album’s many highlights.

Yes, Stacie, I do like the album. And thank you for asking.