Circus Devils: The Devil’s in the Details

“Circus Devils is fun.” That’s how Bob Pollard, former leader of indie-underground heroes Guided by Voices sums up (one of) his (many) current project(s). An exercise in what he calls “punk prog,” on the fifth full length Sgt. Disco, Circus Devils displays the twisted musical worldview of Pollard plus Todd Tobias. Todd adds that “there is an element of not quite knowing where the songs are taking you.”

There are many ways to try and explain Circus Devils. Maybe it’s better not to try.
–Todd Tobias

In GbV, Pollard was running the ship: “I wrote the songs, and the other members–including Todd–provided input for arrangements.” But in Circus Devils, “Todd and Tim [Tobias] write the music, and I come up with the melodies and lyrics. I call it the Ohio Rock Factory. Tim and Todd run the northern plant, and I’ve got the southern plant down here in Dayton. No tours permitted.” 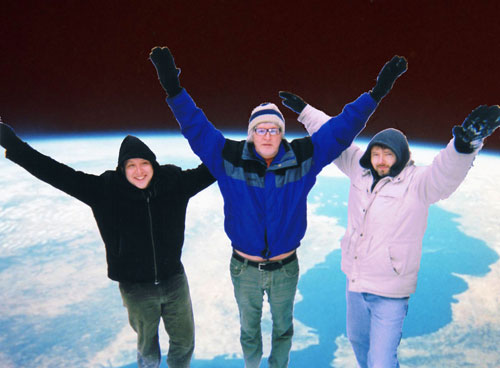 The latest release is packed with thirty-two short songs; I asked the duo if they felt a responsibility to give their listeners value-for-money. Bob: “I feel our responsibility is to entertain ourselves and hope that others can appreciate what we’re doing also.” Todd: “You think you got a good value for your rock dollar? Splendid.”

Humor is always present in and around Circus Devils’ music; the group has a decidedly dada approach to the world. While not allowing that Circus Devils is a big joke (because it’s not), Todd allows that “our role model when it comes to humor is DEVO. They were serious about their jokes.”

One of the tracks on Sgt. Disco, “In Madonna’s Gazebo,” sounds uncannily like a Wings track off Back to the Egg. Pollard claims not to have heard that album, but says “I would consider [the comparison to Paul McCartney] a compliment, I guess.” Asked to describe Circus Devils music for the uninitiated, Todd says, “there are many ways to try and explain it. Maybe it’s better not to try.”