Mon Frere: Let the Music Do the Talking, I Guess 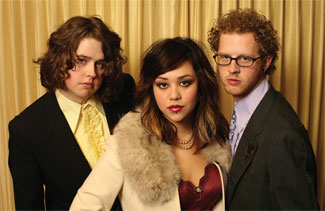 “Basically, I guess that’s a bit more, um, farther than we wanted to go.”

Such was the response to a question about the cover art on Mon Frere’s releases, 2005’s Real Vampires EP and the trio’s newest release, the full length Blood Sweat and Swords. The artwork on both makes liberal use of goth imagery, including bared teeth, shadows, skulls and the like. But for the most part, both guitarist Kyle Swisher and vocalist/keyboardist Nouela Johnston seem content to let their music do the talking. Which, it must be said, makes for a challenging interview.

Kyle speaks in a quiet, unassuming tone; Nouela is more animated in conversation. As a result, even though both of them took part in the interview, Nouela’s answers tended to make more of an impression. Even so, the answers tended to be short and direct; I was left with the impression that the prospect of magazine interviews was not a major part of what attracted Nouela and Kyle into the music business. So my list of questions was exhausted in record time.

We never got around to getting a bass player. We didn’t feel the need; didn’t feel it was important or necessary.
Nouela Johnston

The group sports a wide array of vintage sounds, most of them courtesy of Nouela’s keyboards. Online they have claimed that “Mon Frere prefers to play gear that is older than they are.” One can picture Ms. Johnston scouring eBay and pawnshops for old equipment from which she could draw inspiration. In fact Nouela plays a Roland JX-3P, a 1982 analog machine that features an external box to tweak the sounds. It’s a ‘board more associated these days with electronica than the sort of goth-pop-in-a-roller-rink sounds endemic to Mon Frere. Pressed as to her favorite keyboard, Nouela surprisingly named the Fender Rhodes, a legendary and wonderful — if one-trick-pony — keyboard that was essential in shaping the sounds of Supertramp and other 1970s mainstream acts.

Describing their music variously as “angry, fun music for fun, angry people” and “electro dance-punk,” the group’s MySpace site name-checks Smashing Pumpkins, Yeah Yeah Yeahs, and Bjork as infuences on Mon Frere’s sound. But does the vintage aesthetic carry over into musical influences? Not really. Nouela: “I moved here from Korea when I was eleven, and I didn’t really listen to any music of any sort before that. So all the music that my friends were listening to is what I got into.”

Mon Frere doesn’t use a bass player on their recordings, nor is their live lineup augmented beyond the trio (Kyle and Nouela plus drummer David Hassl). Pressed as to whether their lack of a bassist was a homage to The Doors (or, perhaps the White Stripes), or a financial decision (one less player with which to split the evening’s take), Nouela brushed it off by saying, “we never got around to getting one. We didn’t feel the need; didn’t feel it was important or necessary.”

Kyle did allow that Mon Frere will begin work on the followup to Blood Sweat and Swords in 2007, though at press time they had not begun writing for the album.

Postscript 2008: Sometime after this interview, the band was dropped by its label and broke up.