Home  »  indie • interview • rawk   »   Lake Trout: Weird, Catchy and Everything in Between

Lake Trout: Weird, Catchy and Everything in Between 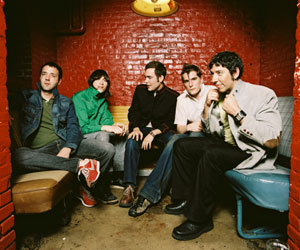 Take equal parts pre-Dark Side of the Moon Pink Floyd, Kid A era Radiohead and Soft Bulletin period Flaming Lips, and what do you get? I’d love to report the answer is Baltimore-based Lake Trout, but it’s not that simple. Those influences are certainly there, and in the best way possible, but Lake Trout isn’t derivative; they’re evocative. On their latest long-player, Not Them, You, they feel a bit like the aforementioned groups, but they don’t really sound like any of them. Nor anyone else, for that matter.

The group has been pegged by many as a jam band; so onstage would their concise arrangements be drowned in a pearly sea of jamwankery? Guitarist Ed Harris gives an emphatic no: “The jam band scene certainly isn’t something we intended to be a part of, but at one point we sort of got lumped in with that. I don’t see the connection musically with groups in the jam band scene. It’s been kind of a challenge in a way, but it’s also cool to be able to go back and forth between different kinds of audiences. I do feel that we have this weird way of appealing to a lot of different people.”

In a live setting the band is tight, powerful; their playing and arrangements are complex while never once veering off into humorless prog territory. Lake Trout’s music lays down a repetitive underpinning, but rock convention is stood on its head: as often as not it’s the guitars — not the rhythm section — that lay down the, dare I say, groove. The rapid-attack percussion is often the “melodic” element. The nimble, commanding drumming and full, analog-feeling keyboards map out the musical territory, then the bass and guitars explore it.

On record Lake Trout seem at once icy and distant, yet visceral and emotional. Onstage, even though the arrangements are close to the recorded versions, the sound is heavy and complex yet airy and fragile. From where do they draw inspiration? The group’s myspace.com page name-checks more than fifty groups as influences. “I did that for the search engines!” confides Harris. “Honestly, I don’t like to really nail down our influences. In the van we might listen to Kool Keith, Pinback, Led Zeppelin, DJ Shadow. We don’t break music up by genres, and a lot of it influences us.”

On Not Them, You, the group tackle a classic Rolling Stones tune, a maneuver that in lesser hands could be disastrous. “We’d always thought about recording ‘Street Fighting Man,’ and it definitely seemed appropriate for the times.” Plus it was an opportunity to do a project with ace producer Dave Fridmann (Flaming Lips, Mercury Rev), a natural choice for this indie-rock band.

Lake Trout manages to walk the fine line between musical exploration and accessibility, but it’s not something the band actually works at. “I don’t think there’s ever been an effort to be more accessible or less accessible,” explains Ed Harris. “We’ve always been weird, catchy and everything between.”