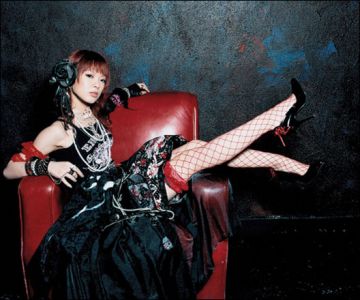 I spoke to J-pop vocalist Nana Kitade through an interpreter. Though her Japanese answers (and my questions, for that matter) were subject to filtering in the process, hearing her voice gave me some sense of her reactions. Though the now-nineteen year old Kitade spoke in a childlike, sing-songy voice — a bit like Pebbles from the old The Flinstones cartoons — she rarely seemed to hesitate before offering an answer to each of my questions.

She told me about her start in music. “I’ve liked singing ever since I was a little girl. I submitted my demo tape to the record company when I was fourteen; it got picked up by Sony Music.”

Though the lyrics on her debut, 18-eighteen, are Japanese, the music is mainstream hooky rock, and keyboards — especially vintage 60s and 80s styled keys — are a focal point of the arrangements. But Nana admitted that while “I played keyboard a little bit in the process of developing the demo tape for this album, I wasn’t actually playing on the recording.” And while the lyrics, such as they are (there’s no translation in the CD’s brief liner notes) are all hers, “I didn’t write the music; only the lyrics.”

The music on the album bears strong influences of British pop of the 60s, and of early 80s new wave. In response to a question about what current music she enjoys, Nana said, “the music that I listen to the most right now is the [group] called Queen Adreena.” They’re a little-known indie alterna-goth-metal quartet out of England; it’s anybody’s guess if there are any musical similarities between their and Kitade’s music; they are fronted by a female vocalist, but presumably she sings in English.

Nana is well known for her particular manner of dress, a style known as Gothic Lolita. Wikipedia describes this as “a street fashion among Japanese female teenagers [that] emphasizes Victorian-style and Edwardian fashion girl’s clothing, [often imitating] the look of Victorian porcelain dolls.” Kitade’s personal take on it could be described as Joan Jett meets Little Bo Peep. But do American audiences “get” it? “I went to the U.S. last summer. And since I can’t speak the language, I wanted my fashion style to represent myself as well as my music. And I thought that American audiences appreciated it very much.”

Kitade occasionally performs with a live band, but more often sings over backing tapes. “I performed two concerts at Otakon, a Japanese pop culture convention [in Baltimore MD]. I also did in-store performances at the Virgin Megastores in San Francisco and Boston. I don’t perform very often with a bando, but when I release a new record, I do a promotional performance with a live band. 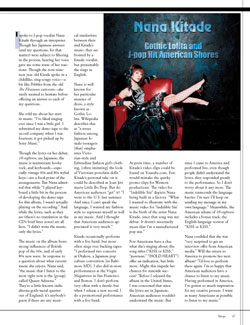 At press time, a number of Kitade’s video clips could be found on Youtube.com. Few would mistake the quirky promo clips for Western productions. The video for “Indelible Sin” depicts Nana being built in a factory. “What I wanted to illustrate with the music video for ‘Indelible Sin’ is the birth of the artist Nana Kitade, since that song was my debut. It doesn’t necessarily mean that I’m a manufactured pop star.”

Few Americans have a clue what she’s singing about; the song titles (“KISS or KISS,” “pureness,” “HOLD HEART”) offer an indication, but little more. Might this impede her chances for stateside success? “Before I released the album in the United States, I was concerned that since the lyrics are in Japanese, American audiences wouldn’t understand the music. But since I came to America and performed live, even though people didn’t understand the lyrics, they responded greatly to the performance. So I don’t worry about it any more. The music transcends the language barrier. I’m sure I’ll keep on sending my message in my own language.” Meanwhile, the American release of 18-eighteen includes a bonus track, the English-language version of “KISS or KISS.”

Nana confided that she was “very surprised to get an interview offer from American media.” Will she return to America to promote her next album? “I’d love to perform there again. I’m so happy that American audiences have a chance to listen to my music. Having performed in America, I’ve gotten so much inspiration for my creative process. I want as many Americans as possible to listen to my music.”