NOTE: The full text of my 2006 conversation with Tommy Keene is here.

It’s like he never left. In fact he didn’t.Tommy Keene’s first major release, 1986’s Songs From the Film was a minor hit on college radio; many saw him then as pop/rock’s Next Big Thing. While his critical stature has never been in doubt, the big time never quite happened. I asked him if commercial success was a goal of his.

“Well, it might’ve been at one point,” he laughed. “I think when the whole Geffen thing went down, they kind of set it up as ‘this has gotta happen in a certain amount of time, and if it doesn’t, we’re gonna go on to the next thing,’ which is a major-label mindset. I think in other situations, [labels] give a band a little more time to develop, attract an audience and sell records. I think if you look at the 1970s, I can name maybe ten bands where the label kept nurturing the act [until they became successful].” Keene cited Cheap Trick’s success as a prime example of the latter approach. He explained further that in his case, the A&R guy assigned to him had four acts: Tesla, Guns N’ Roses, Edie Brickell…and Tommy Keene. The label exec ended up with “four records, three of them platinum. You can see where I didn’t get as much attention.”

Tommy shared these stories matter-of-factly, without a hint of bitterness or regret. In fact he recounted his near-misses with a wry sense of humor. There’s the time he was almost signed to another major label, “and at the last minute, the executive who wanted to sign me got fired for sexual harassment.”

Powerpop has produced some very insignificant bands that did sell a lot of records. I won’t mention names.
–Tommy Keene

But our talk wasn’t all about past near-glories. Crashing the Ether is a strong, tuneful, even timeless record; it’s perhaps the best thing Keene’s released in years. Its sound will be familiar to Tommy’s fans, yet it never sounds retro or out-of step. I asked about the importance of track order on the album.”‘Black and White New York’ is the obvious album opener, because of the way the drums come in…in a sort of dramatic way. There’s a real art to sequencing; more goes into it than people might think.” I pointed out that track 2 (“Warren in the 60s”) could have fit nicely on Songs From the Film, released two decades ago. Tommy agreed, allowing that his music has changed “in pretty minor ways. Obviously I’m very influenced by artists from the 60s and 70s. To me, “Warren…” is totally influenced by Big Star.” In a humble, self-deprecating way, Tommy Keene is careful not to give the impression that he considers himself in the same league as any of the groups he name-checks. 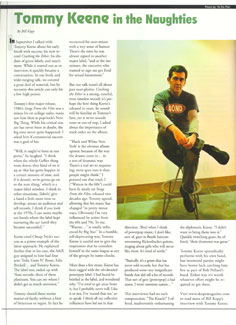 More than a few times, Keene has been tagged with the oft-dreaded powerpop label. I had heard he bristled at the label, and wondered why. “I’ve tried to get away from it, but I probably never will. Like it or not, I’ve ‘mined that ore,’ so to speak. I think all my collective influences have led me in that direction. [But] when I think of powerpop music, I don’t like, sort of, guys in Beatle haircuts strumming Rickenbacker guitars, singing about girls who will never like them. It’s kind of nerdy.”

“Basically, it’s a genre that has never sold records, but that has produced some very insignificant bands that did sell a lot of records. That sort of gave [powerpop] a bad name. I won’t mention names…”

This interviewer had no such compunction. “The Knack?” I offered, inadvertently embarrassing the diplomatic Keene. “I didn’t want to bring them into it.” Quickly switching gears, he offered, “their drummer was great.”

Tommy Keene sporadically performs with his own band, but interested parties might have better luck catching him live as part of Bob Pollard’s band. Either way it’s worth whatever effort might be required to get there.