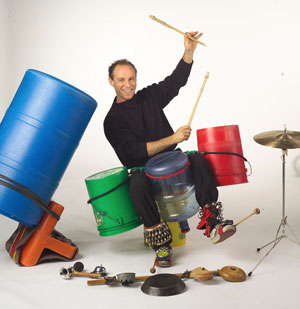 In a way, Billy Jonas is a man of two worlds. He writes, records and performs family music, and he’s a singer/songwriter who explores deeper issues in his music. “It’s like cross training,” he explains.

Billy has released a CD (2002’s What Kind of Cat Are You?) and two DVDs aimed at the family/young audience market. What’s that? “Family music is not kid’s music,” Billy insists. “To me, kids’ music is…Barney.”

He’s also recorded and released four albums of music for adult/general audiences. The latest, Happy Accidents, is brand-new (all are available in local shops and online at billyjonas.com). “People ask me, ‘What’s your genre?'” Billy says. “I call it ‘funky folk music’; some people call it ‘community music’. Really, it’s Billy Jonas music.”

That music is percussion-based, making use of found objects rather than traditional instruments. But the specific nature of Billy Jonas music is largely driven by who’s in the audience. “Wherever I show up, I tailor the show to the audience: not only the song selection, but the way I present it. Some days it’s 80% adults, some days it’s 80% kids.”

So does he write certain songs for certain audiences? “I do often conceive of which audience a given song is for. And,” he pauses to reflect, “I’m often wrong. The songs have a life of their own. If I impose contexts on them, I’m just messing with something pure and divinely inspired.” He observes that “Any song can fit in any context. [But] some songs are definitely more successful in one context than in the other. And it’s not worth ‘pushing the river'”.

He’s not kidding about the divine inspiration, either. “What I’ve found is that every year I get one gift, a song that comes through almost fully-formed. On the new CD, there’s one called ‘To Be One’. I dreamed that one. I woke up about four in the morning, [having had a dream in which] James Taylor was playing me a song on his guitar. It was a beautiful song: just him singing for me. And I had this mixture of sort of swooning rapture at the beauty of the song, and a sort of sadness that I hadn’t written it. I remember thinking, ‘When am I going to write a song that beautiful?’ And then, ‘Ding! That’s not a James Taylor song — he was singing a song that has never been sung before’. So I picked up the phone, and I called myself and left a message of this song. And it was about two-thirds of the song as it exists today that I left on my answering machine. I woke up in the morning about 7am, having forgotten it, and then, ‘Oh. I have a message.'”

Jonas sees his job in simple terms. “My job as a composer is to make music that sounds good, is fun, and is easy.” And he mapped out his plan more than two decades ago. “When I was in college,” Billy says, “I had a vision: ‘I want to make music that is accessible to anybody. It will be fun, accessible to anybody — every age, and cross-culturally — and easily transportable. And I want to be able to add or take away musicians whenever they present themselves, or whenever the spirit moves me.'”

Someday I’ll have a band to do these songs, but for now, you guys help me out. — Billy Jonas

He quickly found the means to develop that vision. “At Oberlin, in 1987 before anyone had heard of Stomp, which was starting around the same time in England — I was in a band, The Big Bang Theory, with people from a mime troupe. None of them were musicians, so we were all playing pots and pans, homemade instruments. So it was in the air, sort of like TV was in 1917.

“But I felt myself a songwriter. So when I graduated, I remember reading an article about David Byrne (Talking Heads) that mentioned he started out by going to open stages. And I thought, ‘A rock star started out by going to open stages? Well, I can do that!’ I had thought you had to leap fully formed into the music world; it hadn’t occurred to me what the step-by-step was. So I started taking my homemade instruments to these open stages at the No Exit Café in Chicago, with these half-formed songs. So I developed this repertoire of songs using these found objects, getting the audience to participate to fill out the sound, basically. ‘Someday I’ll have a band to do these songs, but for now, you guys help me out.'”

The cross-pollination of his two audience types is a natural progression. “As I play more and more, I find that adults are bringing their kids to the adult shows, and more and more adults are showing up to the family shows, even without kids.” At a loss to fully explain his undeniable appeal, Billy shrugs and says that “I do whatever it is I do at the show; there is no template for the Billy Jonas genre. It’s being created as it is happening.”

“I’m a firm believer in having a dream and a vision, and also looking at where doors are opening, and seeing if there’s a way to make them dovetail. Because they don’t, always. So this new album is an attempt to find the dovetail point.” Happy Accidents is the recorded version of this approac 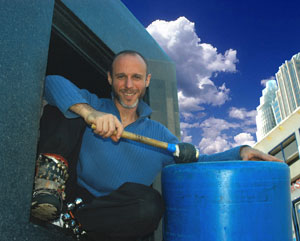 h. “Six of the nineteen songs would fit nicely on an adult album,” Billy says. “This album is an attempt to have it both ways. What I learned with my first family CD (What Kind of Cat Are You?) is that adults were listening when the kids weren’t around! I never anticipated that, and it bolstered me to make this one.

“I said, ‘Let’s expand the boundary of what a “family” CD is.’ There’s nothing on it that’s going to make a parent say, ‘My child shouldn’t hear that.’ There are songs that might make them say, ‘I think that’s a grown-up song’, but it’s not something a child shouldn’t hear. ‘To Be One’ is one of those songs. It would be asking a lot of a very young person, so to buffer that, we’ve made it sound very good, with a sweet melody.”

On Happy Accidents, Jonas is “going for stuff that’s intellectually engaging, spiritually inspiring, heartfelt and fun. All at the same time.” While there’s a whimsical, fun vibe to most of his music, he avoids going for the cheap laugh. “It’s possible to do an entire set of funny material because you know the entire time that the audience is with you. It’s a visceral, audible response,” Billy says. “It’s much braver — and more challenging — to go into the realms of the heart or spirit. As I get older and learn to trust myself and the universe more, I’m willing to do that more in my sets.”

Onstage working with a quartet, Billy works the audience in a big way; connecting with them is central to his musical mission. Sometimes it’s challenging. “The adult audiences are not necessarily demonstrative, even when they’re totally engaged,” he admits. “Often I will look out into the audience and think, ‘That guy is not liking this show!’ And he’ll be the one guy who comes up to me after the show to give me a hug and tell me how much he liked it. The show for me is very much about that: It’s not about me; it’s about our connection.”

“I’ve discovered that the participatory aspect of my music — getting the audience to become an orchestra — works in both markets, but I do it less with the adults. Because after a certain amount [of interactivity], they just want to listen. The kids are willing to do participatory singalongs, hand motions and dances all the way through.”

His rapport with young audiences is subtly, though importantly, different. “With the kids, you know all the way through if it’s working: it’s emotions in primary colors, and doesn’t lend itself to subtler material. But with Happy Accidents I’m messing with that. I’m going for stuff that’s intellectually engaging, spiritually inspiring, heartfelt and fun. All at the same time.”

Billy applies some brilliant yet common-sense methodology to complex musical challenges. For example, “How do we get the audience to do a 6/8 rhythm?” To answer, he asks another question: “Where’s my keys?” Jonas smiles and methodically starts patting — right, then left — his chest, then his lap, then his rump, then repeating. His philosophy is simple yet elegant: “I see the audience as an instrument. The audience is an essential part of this experience.” Paradoxically, he observes that audience is “a highly composed element of my music, even though I never know what I’m going to get.”

A Billy Jonas songbook is coming soon, as is a score for symphony orchestra; look for news on that in spring. Keep up with Billy Jonas by visiting www.billyjonas.com.

A much shorter, edited version of this feature appeared in the January 2009 issue of The Laurel of Asheville.