Free Planet Radio – What in the World?

Asheville NC might not be the first place you think to look for an innovative musical group working in the “world music” genre. But in fact the eclectic mountain city has a deep bench of musicians with stellar world music credentials. 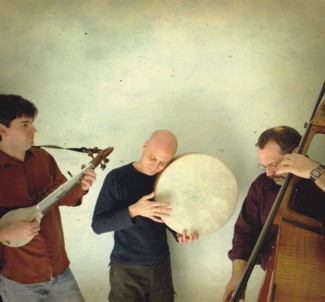 River Guerguerian is an award-winning, conservatory-trained percussionist. Canadian-born, he’s of Armenian-Egyptian extraction. And his lyrical percussion style (“drumming” is far too limiting a term for what River does) is informed by eastern European and African traditions, among countless others. A musician’s go-to guy, River has appeared on over 120 albums, led innumerable workshops, and composed and scored many pieces.

Multiple Grammy®-award winner Eliot Wadopian has been a professional musician for more than three decades. Proficient on bass viol as well as fretted and fretless six-string bass guitars, Eliot has played on scores of well-known recordings with high-profile artists. In addition to teaching, he’s also a regular performer with symphony orchestras in Asheville and Greenville. His versatility allows him to lend his prowess to ensembles representing a wide variety of styles.

Chris Rosser is something of a household name in musician circles. Nominally a singer-songwriter, he’s as easily described as a multi-instrumentalist, composer and producer. He has produced more than forty artists in his Asheville studio, released three acclaimed solo albums and won countless awards. He won a fellowship from the NC Arts Council and studied the sarod (Indian lute) under the master Ali Akbar Khan.

We try to fuse heavy groove with the abstract.
–River Guerguerian

All three maintain thriving solo careers, yet they decided to work together as well, dubbing themselves Free Planet Radio. Chris Rosser says that “All three of us come from backgrounds in jazz, classical and pop music, but we also share a strong love for music from around the world.” He says that Free Planet Radio’s mission is to “explore the ways that all of this music could perhaps be combined into something new.” If that sounds like heady stuff, it is. But it’s incredibly accessible: Free Planet Radio’s music feels exotic and familiar all at once. The first recorded fruit of their labor was an album called New Bedouin Dance, released in 2004.

FPR’s music often makes use of melodies and song structures that sound comfortable to western ears, yet the arrangements keep things interesting for those more accustomed to world music. Eliot Wadopian elaborates: “Chris and I often incorporate traditional Hindustani and Arabic musical traditions that are in no way western in design. The trick is to utilize these concepts along with what we already know: American jazz.” Observing that the world is getting smaller, River Guerguerian observes that “a hundred years ago, if you wanted to hear any other music besides what was around [locally], you would have to travel to another country. Now, within two minutes, you can download and listen to music from a remote tribe in Senegal!”

In October Free Planet Radio released their follow-up, The Unraveling. The new disc picks up where New Bedouin Dance left off: it’s an even more successful marriage of eastern and western styles. The opener “Radio Toure” is a sonic homage to the late Malian guitarist Ali Farka Touré. The snaky “Moroccan Taxi” wordlessly evokes the sights and sounds of Marrakech (Chris describes it as a “cross between an Arabic melody and Chick Corea-ish 1970s jazz fusion”). Other tracks (including “Sanctuary Birds” and “Same Sad Refrain”, both composed by Rosser) explore more straightforward western jazz styles, but Chris’s eastern instrumentation–coupled with River’s always inventive percussion–keeps things endlessly fascinating. On “Seventeen Eights” FPR proves that even mind-bogglingly complicated time signatures can be accessible. River explains in technical terms: “The composition is a 17-beat cycle where the accents are increasingly syncopated as the form progresses.” Put more simply, he says that the track “fuses heavy groove with the abstract.”

If your exposure to world music has been limited to the piped-in tunes in certain retail stores, Free Planet Radio is an excellent and engaging introduction to the genre. For a taste of their music (including video clips showcasing their spirited live performances), visit www.freeplanetradio.com.

An edited version of this feature appeared in the February 2009 issue of The Laurel of Asheville. 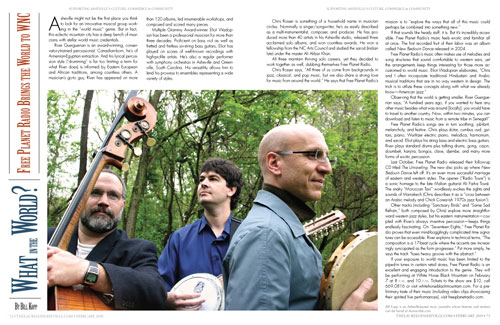