The Fever: Through the Present Darkly 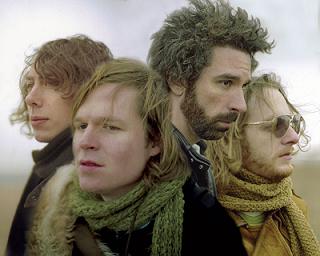 Kemado recording artists The Fever set out a spooky, carnivalesque vibe on In the City of Sleep, their sophomore effort. Taking stylistic cues form Angelo Badalamenti — especially his work with David Lynch on the Twin Peaks soundtrack — The Fever sketch out territory pleasingly (but not overly) familiar to fans of The Cramps, Michael Penn and even Jim Steinman.

With this record, we wanted it to have some hair on it, some dirt under the fingernails.
–Geremy Jasper

Vocalist Geremy Jasper cops to the Badalamenti influence, and proudly adds the work of Phil Spector, plus “early Sun Studio stuff, rockabilly. I’m more into the Nick Cave side of the genre.” When it’s pointed out that The Fever is, to put it mildly, more melodic than the Bad Seeds, Geremy adds, “I’m a big fan of The Beatles too.”

Central to the group’s sound is the percussion work of Achilles Tzoulafis, some of the most musical drumming on a modern rock record. Geremy reveals “the big key to doing that…it was a really interesting process to take him off of the [standard drum] set, and to build sort of ‘mutated’ drum sets, or to take all his cymbals away from him, or to have him playing standing up. It was kind of like forcing him to play with one arm tied behind his back, to see what he’d come up with because of those restrictions. And he came up with some beautiful, beautiful stuff.” 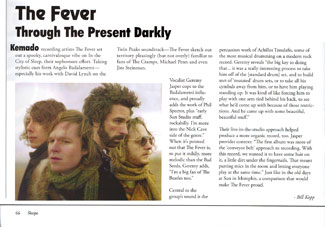 Their live-in-the-studio approach helped produce a more organic record, too. Jasper provides context: “The first album was more of the ‘conveyor belt’ approach to recording. With this record, we wanted it to have some hair on it, a little dirt under the fingernails. That meant putting mics in the room and letting everyone play at the same time.” Just like in the old days at Sun in Memphis, a comparison that would make The Fever proud.

Postscript: Sadly, in 2006 — not long after this interview — the band broke up.