Under the Microscope with Fall Out Boy 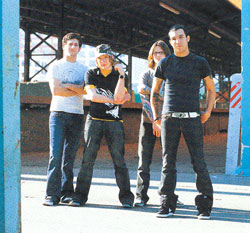 Note: This was my first magazine cover story — bk.

It’s the last day of June, and Island/Def Jam recording act Fall Out Boy is “a little bit too far outside San Diego” on an early date on the 2005 Warped Tour, promoting their latest release, From Under the Cork Tree. They’re in Chula Vista, which feels very remote because the cell phones aren’t working reliably today: “My phone is definitely gonna cut out,” bassist/lyricist Pete Wentz warns me. “‘Cause we’re in a weird spot, and there’s like thirty thousand people trying to use their cell phones all at once…” But there’s no complaining: “I’m so excited about where we are,” says Pete. “I’m so happy, and we are having the best year of our lives. I just want to thank everybody for that.”

Had we come out in the 80s, we would have been one of the ‘hair bands.’
–Pete Wentz

Fall Out Boy’s music is hooky, exuberant, emo-pop wrapped up in a punky package; by turns snarky and angst-ridden. Yet “we consider ourselves a pop band. In contrast to songwriters like Bob Dylan, who can come on and improvise — and that’s part of the art — in a live setting we try to stick to the song structure. Yet if the crowd goes in a direction, we kind of follow. The crowd is that variable, that wildcard. You get up there and these explosions are happening.”

Wentz reflects on the tension between live and studio. “The studio and the stage, they’re two completely separate ideas. Even if you tape a live show, it doesn’t really capture it. The actual electricity that you feel in the air when the crowd is screaming and clapping along…you just can’t recreate that. In the studio, “on one hand, we want this grittiness, this feel of the crowd…but in the world of ProTools and technology and the internet, the record has to sound good too, you know?”

On From Under the Cork Tree, “we wanted a huge-sounding record. We’re the kind of band, you know, had we come out in the 80s, we would have been one of the ‘hair bands.'” He cites the Axl Rose-stepping-off-the-bus scene in the “Welcome to the Jungle” video as the “colossal” sort of feel they were aiming for.

“In the last four years, we saw the world. We played shows in Tokyo, in Manchester England. It’s been crazy for us. We felt the energy of that, and allowed ourselves to have a wider perspective. And at the same time, when we wrote our last record, we thought nobody was listening. We were pretty sure. And then all of a sudden there’s a magnifying glass out. Everybody’s looking, and everything’s being scrutinized. We knew that going in. I think that influences how you write a record.” 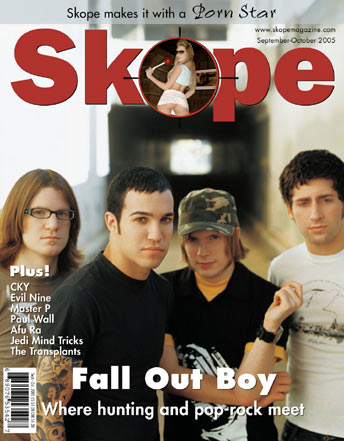 With the whirlwind touring, time still has to be found to communicate with the fans. “One of our main ways of interaction with people is through the internet. For example, some kid in Oklahoma can’t necessarily see us, but he can download our music from www.falloutboyrock.com and then email us. As you get to a bigger level as a band, you need to try and maintain those connections that you have. We’re not the kind of band that goes out and parties, so I take an hour a day…maybe two…and that’s nothing compared to the kid who really wants to be in touch with us. Definitely, it’s worth my time.”

In interviews, Fall Out Boy has distanced itself from 2002’s indie release Evening Out With Your Girlfriend. Yet on the coattails of the group’s current success, that disc was recently re-released. Wentz chuckles nervously, cautiously, at the subject being raised. “For awhile there were legal reasons where we were not allowed to speak about it. And since then we’ve come to a better understanding, a better business deal. Because we’re a band that does things on our own terms, we’re not going to get bamboozled into doing anything that we don’t really want to do. People can read into that whatever they want.”

Pete offers young bands some advice: “be careful, and don’t just sign the first thing that comes on your plate because you’re hungry. More than anything, that’s why we try and take newer and younger bands under our wing, after our experiences.” This could be mildly amusing, coming from a mere 23-year old, but Pete Wentz knows what he’s talking about; he means what he says, what he writes. 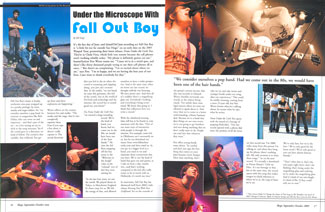 From Under the Cork Tree opens with the sound of a barrage of popping flashcubes. “Our last record opened with a phone dial tone; the premise of all the lyrics on that record was ‘I’m 3000 miles away from this person I’m talking to, and when they hang up the phone, there’s nothing left. My only recourse is to write these songs.'” So on the new record, “It’s actually a throwback to Duran Duran’s ‘Girls on Film’. It’s our homage to that, but at the same time, the record opens with this song that makes tongue-in-cheek reference to where we’re at, the cusp of fame we’re on: