Tom Dudley Does it Right 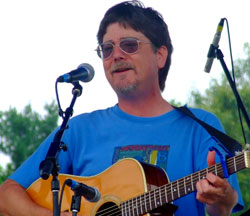 If a musician attends the famed Berklee College, then goes on to work as an electronic technician at Moog Music, and then chooses bluegrass music as a career, he must be a musical carpetbagger. Right?

“My mother was from southern Ohio, near Kentucky…almost Appalachia. My parents sang Carter Family songs around the piano,” guitarist Tom Dudley says. “I hooked up to music pretty early on,” he says.

“I got reintroduced to bluegrass at Yale University. There was a bar called The Enormous Room. It was open to graduate students, and since I was under age, my sister would sneak me in to listen to the music.” The house band was a local radio favorite, the Apple Country String Band. Major names like Ralph Stanley and Bill Monroe performed there, too. Tom was hooked. 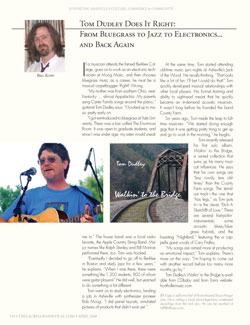 “Eventually I decided to go off to Berklee in Boston and study jazz for a few years,” he explains. “When I was there, there were something like 1200 students, 800 of whom were guitar players!” He did well but yearned to do something a bit different.

Tom went on to study electronics, landing a job in Asheville with synthesizer pioneer Bob Moog. “I did panel layouts, simulated pictures of products that didn’t exist yet.”

At the same time, Tom started attending old-time music jam nights at Asheville’s Jack of the Wood. He recalls thinking, “That looks like a lot of fun. I’ll bet I could do that!” Tom quickly developed musical relationships with other local players. His formal training and ability to sight-read meant that he quickly became an in-demand acoustic musician. It wasn’t long before he founded the band County Farm.

At Berklee, there were something like 1200 students, 800 of whom were guitar players!
–Tom Dudley

Six years ago Tom made the leap to full-time musician. “We started doing enough gigs that it was getting pretty tiring to get up and go to work in the morning,” he laughs. Tom recently released his first solo album, Walkin’ to the Bridge, a varied collection that sums up and distills his many musical influences. He says that his own songs are “less rowdy, less old-timey” than the County Farm songs. The standout track–the one that “has legs,” as Tom puts it–is the clever “Etch A Sketch® of Love.” There are several fast-pickin’ instrumentals, some acoustic blues/bluegrass hybrids, and the haunting “Nightbird,” featuring the a cappella guest vocals of Cary Fridley. 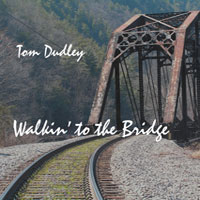 “My songs are aimed more at producing an emotional impact,” Tom explains. There’s more on the way: “I’m hoping to come out with another record before too many more months go by.”

Tom Dudley’s Walkin’ to the Bridge is available from Amazon, CDbaby and from Tom’s web site hoothollermusic.com.