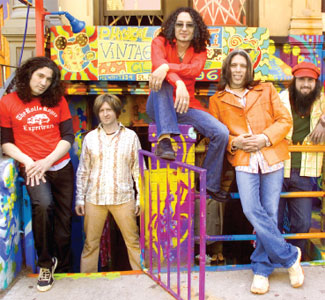 A couple years ago, Asbury Park NJ-based Latin-rock artists deSoL were signed to Curb Records, a staid, ultra-square label known for being home to Tim McGraw and (shudder) The Osmonds. If that sounds like a match destined to fail, in retrospect it was. Unhappy with the label’s efforts on their behalf, deSoL recently freed themselves from their Curb contract and are now proceeding as free agents. Their most recent self-released effort is a live EP (available from their website www.desolmusic.com) entitled LiVE/ViVO.

Lead vocalist Albie Monterrosa expresses some dissatisfaction with the 2004/2005 studio disc. “We did these demos on ProTools [digital recording system]. Curb Records wanted to cut corners…and release the masters. They went in the studio and polished it and polished it. We’re proud of it to an extent, but it doesn’t sound the way we want to sound.” And while it’s true that there’s a slickness to the album, deSoL’s debut remains a fun listen start to finish. The lyrics are unremittingly positive and uplifting. There’s the playful romance of “Chica de Miami,” and the message of “Blanco y Negro” (said message being that life isn’t as simple as black-and-white, and that’s part of what makes it great). And “Karma” explains that “it all comes back to you” while echoing Santana’s cover of Fleetwood Mac’s “Black Magic Woman.”

In any event, while deSoL continues to work the eponymous full-length release (still available on Curb), the new limited-release EP showcases stinging, rousing versions of five songs from the long-player. LiVE/ViVO rescues a standout track from the first pressing of the album, “Cumbia Raza,” a song set to a cumbia (a Colombian-originated dance) beat. DeSoL serves up a rich stew of cultures; Cuban and South American sounds sit comfortably aside hiphop and rock beats; this synthesis makes the album — despite Albie’s misgivings — a winner.

Sonic comparisons to Carlos Santana are inevitable, but Monterrosa defends the similarity: “any time you mix Latin rhythms with lead guitar, you’re gonna think of Carlos.” The band’s sound is much more firmly rooted in rock traditions than many of the bands to whom they might be compared. Albie says “the beautiful thing about our group is that we haven’t even started to discover what this all means yet.” He allows that deSoL might draw more deeply on Latin influences on the next disc, but assures that “we’re not gonna knock people over the heads with ‘here comes a Spanish band,’ because,” he argues, “we’re not a Latino band, we’re an American act.” 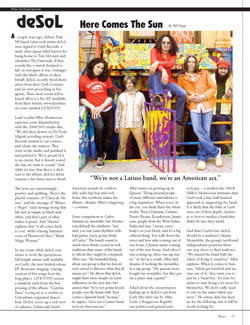 Albie muses on growing up in Queens: “Being around people of many different nationalities is a big inspiration. When you’re in the city, you think that’s the whole world. There’s Haitians, Cubans, Puerto Ricans, Ecuadorians, Jamaicans, people from the West Indies, India and Asia. I mean, everybody’s on your block, and it’s a big cultural thing. You walk down the street and hear salsa coming out of one house, Chinese music coming out of the next house. And when I was coming up, there was rap music.” In fact as a youth, Albie had dreams of working the turntables in a rap group. “My parents never bought me turntables, but they got me a piano and a guitar!”

Asked about the circumstances leading up to deSoL’s exit from Curb (the label run by Mike Curb, a Reagan-era Republican politico and general anti-rock guy — a modern-day Mitch Miller) Monterrosa intimates that Curb took a lazy, half-hearted approach to supporting the band. It is likely that the folks at Curb were out of their depth, clueless as to how to market a band that didn’t fit into their mold.

And that’s Curb’s loss; deSoL should be a marketer’s dream. Meanwhile, the group’s newfound independence positions them one step closer to their audience: “We started the band with the [idea] of doing it ourselves,” Albie explains. When it comes to business, “labels get involved and say ‘stay out of it;’ they want you to just be a ‘band boy.’ It’s time for artists to start doing a lot more for themselves. We don’t really need to rely on the major labels any more.” No release date has been set for the followup, but it will be worth looking for.