Neil Finn – Back in the (Crowded) House

The date was June 1, 1981. Riding high on the success of their latest hit single “History Never Repeats,” New Zealand art-pop group Split Enz was in the midst of a North American tour. Fake I.D. in hand, this writer was in line outside Atlanta’s Agora Ballroom, waiting to see the quirky pop group and their newest member, guitarist/songwriter Neil Finn. I got in, and enjoyed a fantastic show.

I saw the group again a year later, touring in promotion of their Time + Tide album and its MTV hit “Six Months in a Leaky Boat.” That was their last North American tour. By the end of the Enz era, Neil Finn had become the de facto leader of what was once his older brother Tim’s group. Out of the remnants of Split Enz, he and drummer Paul Hester added Nick Seymour, and Crowded House was born. 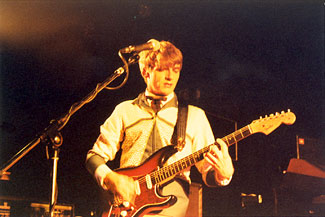 From the mid 1980s to the late 90s, Crowded House was a major concert draw and a top-selling act in most of the world, but enjoyed only middling success in the US market. Looking back, Neil tells me, “I don’t think we set out to be obscure, but perhaps we didn’t want mega-stardom as much as you have to in order to actually get to the very top.”

I was fortunate enough to see Crowded House perform on two separate tours; I recall thinking at the time that I had never witnessed a band having so much fun onstage, all the while engaging their audiences. “In some ways, [playing live] becomes more precious as time goes on,” Neil says today. “We’re acutely aware that no matter how much we travel, or however weary we might be, we know that people have paid and waited and anticipated the concert. We want to get to know them; we want to give them the best show we can. It’s an old-fashioned concept, yeah.”

We’re not doing a nostalgia trip and trying to recreate something. That would be impossible, y’know?
–Neil Finn

Aside from the chemistry of the core trio (they briefly added Tim Finn in 1991, replacing him with Mark Hart in 1994), Crowded House’s main asset has always been Neil’s songwriting. His music conveys emotion in a manner both personal and universal, again making that connection with fans. “If somebody tells me that a song of mine moves them to tears, or helps them feel better about their day, or gives them comfort,” Finn says, “then I’d take that as a huge blessing.”

By 1996 Finn was keen to do solo work, and he disbanded Crowded House. He released four solo albums, and reunited with Tim for two well-received albums. The rest of the group went their own ways.

Though in many ways the most outwardly jovial of the group, drummer Paul Hester battled depression for years. He took his life in 2005. 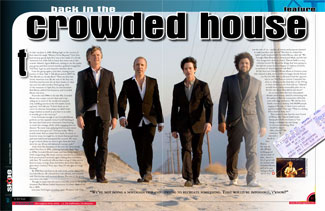 Last year, Neil began recording again. “I started with Nick-just the two of us-and for all intents and purposes [started to make] another solo record.” But then he realized he hadn’t really finished with Crowded House, after all. “We brought Matt [Sherrod on drums] and Mark, and the last four songs were done as a band. Time on Earth is a very cohesive record. It’s about the things that were going on the last two years; there’s a degree of sadness involved, on account of what happened with Paul.”

So the first new Crowded House album in fourteen years was released in July, and a world tour began shortly thereafter. For the fifth time in 26 years I had the opportunity to see Neil Finn in concert. I attended the show in Atlanta, on the final date of the US leg of their world tour. As Neil told me, “Atlanta’s actually been a fairly memorable place for us. It’s the city where Paul did his last show.”

As on most dates this tour, they played theatre-sized venues, ideal for interacting with the audience. But the connection still holds, even with large audiences. “We did the Live Earth concert in Sydney, with 60,000 people singing at the tops of their voices and waving their hands,” Finn says. “That is a feeling that is hard to beat, too.”

Finn makes it clear that the new Crowded House (the Time on Earth studio lineup plus Neil’s son Liam) is “not doing a nostalgia trip and trying to recreate something. That would be impossible, y’know?” He continues. “It was such a shock to lose Paul in the way we did. [While] nothing good can be made of that…there’s a lot of good will we created with Crowded House, and we’re just trying to [build upon] that.”