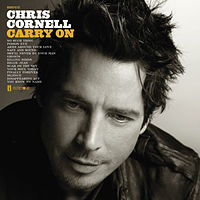 Chris Cornell says that once a song is written and released in some way that it “has its own life.” With each new interpretation of the song and each new place it goes, it embodies something different or more. This is why he says that, as long as the songwriter is in charge of where his/her music is going, there should be no boundaries. If it’s still the same notes, length, and performance, it’s still the same song.

Cornell, of Soundgarden and Audioslave, is on his second album in his solo career. His latest, Carry On includes “You Know My Name” (the theme song to the 2006 James Bond movie Casino Royale) and an unexpected rendition of “Billie Jean” (originally by Michael Jackson).

Growing up, Cornell used music as a way to escape. He says it’s like being “invited into another world where you can forget who you are and where you are.”

His interest in playing music sprouted after his mom bought an old, upright piano. He began to write songs without knowing how to play, and later learned theory in school. Today Cornell says he plays piano here and there on his new record, but “wouldn’t join a band” for his piano skills.

He says that traveling can be a healthy experience. Leaving where you’re from and being a foreigner somewhere makes you realize “what’s wrong with where you came from, what’s right, why you’re lucky, and what you miss.” Cornell wrote about half of Carry On in Paris, France.

More so then the written word or even visual art, Cornell says that “music is the language for every culture.” He says there is a lot of experimentation and freedom in music right now. According to Chris, a producer’s job is to do “the things musicians don’t like to do.” Steve Lillywhite, who has also worked with Siouxie and the Banshees and the Pogues, produced Carry On. Cornell believes that it takes trust in a producer to do what is right with your music, and to mold it in the right way. 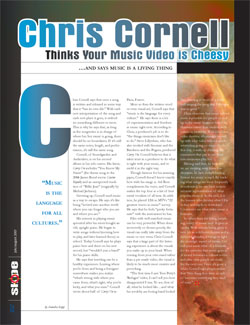 Though famous for his amazing pipes, Cornell doesn’t know exactly how wide his range is. Axl Rose compliments his voice, and Cornell makes the top four in a list of best metal vocalists of all time. In addition, he placed 12th in MTVs “22 greatest voices in music” survey. He says that he feels “pretty fortunate” with the instrument he has.

Film with well-matched music can be very powerful. When done incorrectly or chosen poorly, the visual can really take away from the music or visa versa. Chris Cornell says that a large part of the listening experience is about the visuals you make up in your head. When coming from your own mind rather than a pre-made video, the visual is likely to be much more creative and provoking.

“The first time I saw Tom Petty’s ‘Refugee’ video, I can’t tell you how disappointed I was. To see, first of all, what he looked like…and what his scrubby-ass boring band looked like, standing in front of a brick wall singing the song that I thought was so great.”

Chris observes that music videos made it possible for people to end up in the music business based on charisma rather than musical inclination or creativity. With a brilliant video director, it’s possible to end up with a hit video without much interesting going on musically. In this way, it ends up cheating the consumers that pay to see these non-musicians play live.

Having said that, he believes we are steering away from this direction. In fact, today’s leading format for music is mp3. By tracking what songs are most frequently downloaded, we can have a more accurate representation of what popular music is. In the end, it is the listener who decides what CDs to buy and mp3s to download. Consumers are what make music a buisness.

So when does the living, breathing, entity of music end? It goes in circles. With sounds being given a new life in a different format and in different decades, it brings to light the nostalgic aspect of music. Cornell pins some what of a formula for the patterns that music goes in. A sound becomes a cultural norm, and after time people are ready for the next one. Once it’s gone a while, Cornell says people realize that “this thing they were so sick of becomes something they kind of miss.”