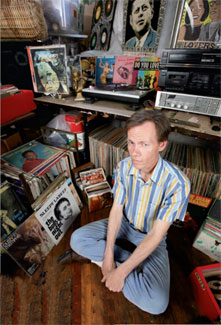 What’s more, rather than being a mere collector, he actually listens to those records. “I’ve got [turntables] pretty much everywhere that I am,” he explains. He has a record player in his downtown art studio where he “listens to most of the records,” plus a “turntable at home, and I’ve got a little portable one at my office job that I play when I can.”

In fact, he rarely listens to CDs: “I have one CD player, and my car has one, but I really don’t listen to much other than records.” Lance first got into music by listening to his older brother’s Deep Purple and Rick Derringer albums. “We got an offer to join the Columbia House Record Club — ‘eight records for a penny’ or something,” he recalls. “The first record that was actually mine was Endless Summer [1974] by the Beach Boys.”

Over the years, he got rid of a few records and added many others. Lance’s collection now numbers well over a thousand vinyl discs. He and Sue “married” their record collections before getting married themselves; Lance jokes that this let Sue know that “a commitment was involved.” Their vast collection spans rock, country, New Orleans R&B and soul.

Besides the greater “warmth” of vinyl, Lance values the sleeve graphics on those old records: “That was half the allure when I was a kid: looking at the album art.” Lance knows how much records weigh: he joked to a fellow collector, “remind me to be out of town if you move!'” 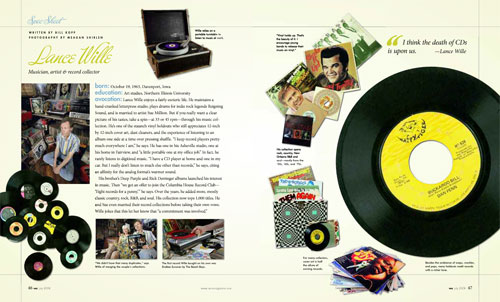