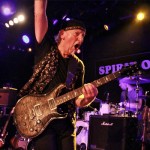 Ask most people who the leader of Jethro Tull was, and they say, “Why, Mr. Tull, of course!” No, that’s Ian Anderson you’re thinking of. But the mainstay of that group alongside the flutist/singer was ace guitarist Martin Barre. On all but the first of the band’s twenty-plus albums, it’s Barre’s fretwork that you’ll hear.
Read More
The latest example of Ian Anderson‘s ongoing twofold mission (to encourage a modern-day reconsideration of Jethro Tull‘s back catalog, and to provide be-all-and-end-all versions of those albums) continues with Minstrel in the Gallery: 40th Anniversary La Grande Edition. The 1975 album spawned only one single a-side release (the title track, briefly appearing at #79 on
Read More
Jethro Tull‘s 1974 album WarChild occupies a curious place in the band’s history. Their previous album, 1973’s A Passion Play, had been roundly shellacked by critics. That album certainly had its fans; it made #1 on the charts, though that might have been a coattail effect of their earlier albums. But by the time of
Read More
Unlike, say, Creedence Clearwater Revivial – or even The Beatles – Jethro Tull have rarely been anyone’s idea of a “singles group.” As the leading folk-prog group of the rock era, the Ian Anderson-led group released a steady line of albums, one a year from 1968-80. And many of those did spawn a single: seven
Read More
Ian Anderson cuts a memorable figure in the history of rock’n’roll; when his name is mentioned, the image that comes immediately to the minds of rock fans is of Anderson standing on one leg, playing his flute. Or perhaps it’s the Jethro Tull leader leaping madly about the stage as he sings his songs about
Read More
A few weeks ago, Jethro Tull‘s highly regarded 1971 album Aqualung was released in a special 40th Anniversary package. But let’s be honest for a moment: this isn’t 1989 (by which time the CD format had completely taken over from vinyl) or 1993 (the year I finally broke down and bought a CD player). So
Read More
In his best-selling 2005 book Healthy Aging, Andrew Weil MD sets forth a compelling and ultimately convincing argument concerning the benefits of aging. Using the examples of wine, whiskey, cheese, beef, trees, violins and antiques, Weil argues that some things do in fact get better with age. As you might guess, once he’s discussed those
Read More