Here’s another entry in my short-review series; these three are instrumental albums. Vince Guaraldi Trio – A Boy Named Charlie Brown An entire generation grew up with the music of Vince Guaraldi, becoming familiar with he melodic brand of music even if they (we) might have claimed not to like jazz. As the background music
Read More
Okay, not everyone likes Christmas. Some are turned off by the commercial character of a day that is supposedly to commemorate the central figure of Christianity (a child who – most Biblical scholars agree – was born in the spring, by the way). Others dislike it for the music. I don’t subscribe to either of
Read More
A quick roundup of some notable jazz releases, from your friendly neighborhood jazz novitiate who nonetheless knows what he likes… Toots Thielemans – Yesterday & Today (Universal Music) My first – and for many years only – exposure to the Belgian harmonica player’s music was his work on Billy Joel‘s kinda cheesy “Leave a Tender
Read More 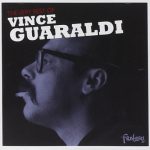 The music of Vince Guaraldi could well be described as “jazz for people who don’t like jazz.” And even knowing what little I do about Guaraldi the man, I strongly suspect that he’d be pleased with that description. He was a hipster-looking pianist who created arguably the most accessible body of work in the jazz
Read More