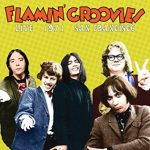 One could be forgiven for thinking that the Flamin’ Groovies visited our planet from another time and or/dimension. Their music has been resolutely out of step with prevailing trends. Which isn’t to say it’s not great: tracks like “Teenage Head” are classics of the garage rock subgenre, and “Shake Some Action” is an exemplar of
Read More