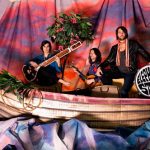 There aren’t many rock bands that feature the sitar as a primary instrument. But Montreal-based Elephant Stone does, and the band incorporates the Indian classical acoustic instrument into its modern sound. The 18-plus stringed sitar first entered Western pop culture in the mid 1960s via the Beatles, and is most often associated with that era
Read More
Tribute albums can go any number of ways: they can showcase new takes on old music, they can provide a way for young or relatively unknown bands to use classic tunes to jump-start their own careers, or they can be pretty much a waste of everyone’s time. Cleopatra Records specializes in tribute albums, and while
Read More
I had the pleasure of attending more live music shows this year than I could count. A lot. Really. These were my favorites. Click on the titles for a full review/feature. Cody ChesnuTT Owing to my schedule, I passed the interview duties for this one on to my daughter, an able writer/journalist in her own
Read More
I started attending arena-scale rock concerts back in the late 1970s. My first show was in October 1978, seeing Electric Light Orchestra with their hamburger bun/spaceship setup at Atlanta’s Omni. (In the words of Rob Reiner‘s Marty DiBergi character in This is Spinal Tap, “Don’t look for it; it’s not there anymore.) One of the
Read More