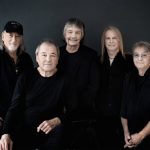 If Deep Purple had done nothing more than record “Smoke on the Water,” the band would have earned a place of honor in rock history. Though the riff-based classic (with a true-story lyric about a fire at a Montreux, Switzerland concert venue) has become a cliché among musicians and fans alike, there’s no mistaking its
Read More

Thank You, Friends (Concord Bicycle Music) I remember a time when seemingly nobody knew about Big Star; happily for me, that was about the time I found “new old stock” vinyl copies of #1 Record and Radio City in a local record store. I was immediately hooked. As is its character, Big Star’s Third album
Read More
Each of these is a multi-disc set collecting archival (and sometimes previously-unreleased) music, but other than that, there’s little to connect these releases in any stylistic fashion: Celtic soul, proto-funk/pop, hard rock, comedy spoken word, and psychedelic post-punk. All have been sitting on my desk awaiting review for far too long. So, here ya go.
Read More
Deep Purple are one of those bands with a tortured history of lineup changes, stylistic detours, and changing fortunes. While their real-life saga doesn’t rival that of the just-this-side-of-fictional Spinal Tap, some of the in-jokes in the latter group’s classic film perhaps cut a bit close to the bone for the guys in Deep Purple.
Read More