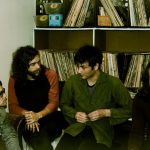 Coming out of the diverse Atlanta music scene, Gringo Star makes hooky pop-rock that – while informed by sounds of the 1960s – doesn’t rely on aping vintage sounds. Their repertoire is more varied stylistically than the standard-issue indie-rock outfit. “We’re not trying to recreate some specific genre,” says guitarist Nick Furgiuele. “We like to
Read More
“I look back now,” says Shuggie Otis, “and I think, ‘Wow. I must have a lot of patience!’” The multi-instrumentalist is reflecting on the curious arc of his career so far: his fame began in earnest when he was a young teen, continued into his early twenties, and ended abruptly after the relative commercial failure
Read More
It was just a bit more than three years ago today that I got the opportunity to speak with Chris Squire of Yes. Though he was never put forth as the “leader” of the group – more than most any other group of the era, Yes never really seemed to have one out-front, in-charge member
Read More
In 2015, nearly every concertgoer carries a smart phone with a built-in camera, so snapshots of the onstage performers aren’t exactly a rare commodity. But there’s a long and proud tradition of legitimate concert photography, and it’s no hyperbole to call it an art form. Some of the most iconic images in music have come
Read More
As much as I enjoy discovering new music – both live and on physical recorded media – my favorite part of this Musoscribe gig is engaging interviews. I’ve been at it of many years, but every year find new and fascinating conversations with musicians whose work I admire. 2014 was no exception: every one of
Read More
Forty-six years after the release of their last psychedelic-flavored release, New York City-based rockers The Blues Magoos have returned with a new album, Psychedelic Resurrection. From its multicolored fractal cover art to its song titles (“D’Stinko Me Tummies on the Blinko”), it’s clear that the band’s original approach – slightly goofy lyrics paired with aggressive
Read More
According to our friends over at Wikipedia, krautrock is defined as “a form of rock and electronic music that originated in Germany in the late 1960s, with a tendency towards improvisation around minimalistic arrangements.” Though the style had its adherents in the 1970s – famed tastemaker/DJ John Peel among the most well-known of them –
Read More
Continued from Part One… Keith Emerson was mainly in town, though, for a press conference at which the engineers at Moog Music unveiled what Emerson dubbed “the clone,” a from-the-ground-up duplicate of the massive modular unit Emerson carries around with him to gigs. Partly a can-we-even-do-it exercise, the development of the Emerson Modular is a
Read More
The history of rock’n’roll is littered with artists who — for one reason or another – never quite got their due. Del Shannon is on that list. Best known as the man who gave the world the 1961 hit “Runaway,” he also achieved permanent trivia question-fodder status as the first American to cover a Beatles
Read More
It takes awhile to earn status as a Grand Old Man of, well, of anything. It seems to take even longer if the thing in question is rock music. But Nik Turner has earned the crown. As an early member of innovative British-based band Hawkwind, he added a jazzy dimension to their hard rocking, Pink
Read More