A very good friend of mine – a drummer and a serious student of music – has, in the last several years, become quite wary – cynical, almost – about musical genre labeling. In his case, it’s the term garage rock. “I can’t tell you how many times,” he’ll say, “that some band has advertised
Read More
Here’s one often reliable method for discerning whether an album is an important one: when you first hear it, do you recognize several of the songs via popular cover versions? I didn’t grow up with the blues; I’m the product of a white, middle-class suburban family; any “ethnic” music I heard growing up in south
Read More
The venerable Blue Note label has long been a trademark of quality; even if you’re not familiar with the artist or the recorded work, chances are that if it came out on Blue Note, it’s at least worth checking out. And that’s true for the pair of confusingly- and similarly-named albums released in the early
Read More 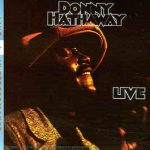 Take the crowd command of Isaac Hayes in his prime, the soulful melodicism of Steve Wonder at his peak, and the musical chops of, say, Billy Preston, and what do you get? Well, one thing you might get is the 1972 album Donny Hathaway Live. A mere eight songs, and originally on a single vinyl
Read More
Here’s an odd one. Funk guitarist Eddie Hazel – part of the highly-esteemed Parliament / Funkadelic family – released his own solo LP in 1977. And while he’s most often associated with the soaring, blistering metallic axework with which he dazzled listeners on such discs as Funkadelic’s 1971 Maggot Brain, on Game, Dames and Guitar
Read More
Quick: When I mention the band Thin Lizzy, what’s the first song that comes to mind? “The Boys Are Back in Town,” right? Okay. The next song? “Jailbreak.” But both of those songs are on one album, the group’s Jailbreak LP. Those among you who are more well-versed in the Irish band’s out put might
Read More
By 1972, legendary blues guitarist and vocalist Albert King had little if anything left to prove. Pushing fifty, the man was a giant both in reputation and physical stature. His recording career began rather late in life: his first album The Big Blues came out in 1962. So he was a mere ten years into
Read More
File this one under Great Lost Albums of the 70s. As the story goes, the tracks that make up The Lost Album Featuring “Watermelon Man” were recorded by James Brown‘s trombonist Fred Wesley, with The JBs backing him, and intended for an album that never materialized. As you would quite rightly imagine, the arrangements are
Read More
The Numero Group has quickly developed a well-earned reputation for unearthing fascinating archival material. Jazz, soul, R&B, disco, psych…you name it, Numero has scored old unreleased session tapes to bring previously-unheard music to – if not the masses – discerning 21st century ears. Perhaps the most unusual entry in the ongoing Numero series (#35 if
Read More
Though Stax/Volt was (and will remain) closely linked with its hometown of Memphis, not everything that came out on the legendary label was Memphis-based. Some of it wasn’t even recorded on McLemore Avenue. Some artists worked out of Muscle Shoals AL, and some were from even farther afield. The Dramatics, for example, were from Detroit.
Read More