Though they had released three excellent albums to date, in 1978 Cheap Trick was still laboring in relative obscurity. The Rockford, Illinois band’s releases – 1977’s self-titled debut, In Color from later that same year and 1978’s Heaven Tonight – had each sold better than the last, but none cracked the top 40 album charts.
Read More 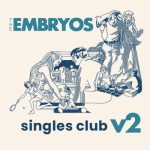 I was already predisposed toward liking this 45 before I heard it; The Embryos’ Open the Kimono (reviewed a few months back) is an instantly likable collection of chiming, catchy pop-rock. “Popular Character” has shades of Raspberries, Pilot and Matthew Sweet. So yeah, it falls loosely into the popwerpop subcategory. But if that’s not your
Read More

More capsule reviews! New music! Vinyl titles are noted with the designation (LP). Fastball – The Help Machine If you’re a certain age, you remember “The Way.” If you were especially sharp in those days, you might know the even better “You’re an Ocean.” Fastball’s approach struck me as a kind of American answer to
Read More