A Conversation with Devo’s Gerald Casale (Part 2 of 3)

What about the era of the album? As a creative delivery system or a medium, is the album still relevant?

Gerald Casale: You know, somebody could do it almost like a contrived artifice. An artist could have the balls to say, “I’m only putting this out on vinyl, and you’re only going to listen to it in the sequence that I conceived, because that’s part of the art.” Right? They could do that on purpose. If they mattered to anybody, they could say that, and people would stay in class; they’d go for it.

But, of course, nobody can credibly do that when they release in all formats, and you can stream it, and you can shuffle it, and you can do whatever you want with it. I don’t think it’s anything other than what a certain kind of artsy cult group of consumers that could ever buy that into it, because we just don’t have the culture for it. We don’t have the mindset for it. Nobody’s going to a record store and using their last pennies from an allowance to buy a beautiful 12-inch vinyl with beautiful graphics and lyrics printed that is a collector’s item and an object that you revere, and now you’re gonna go home and smoke some homegrown pot that’s really not strong, not hydroponic. You’re gonna smoke five joints and wonder if you’re high. You’re gonna lay on the floor, put this on, you know, and you’re gonna begoing, “Oh my god, I get this guy’s vision,” you know? 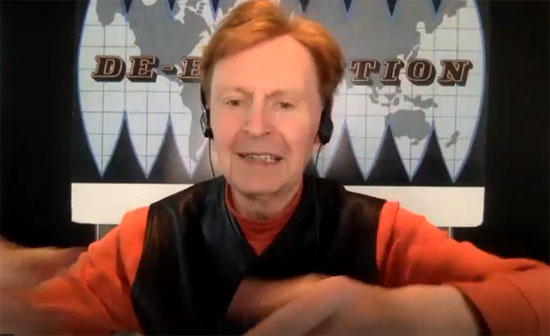 When Devo started, did you think you were doing something revolutionary?

Yeah, Mark and I did. We kind of knew what we were doing. Devo was very conscious and conceptual; what you got to hear was just the tip of the iceberg. We certainly had a lot more ideas in this brain trust than we got out there, but we did think we were at least the “new” in new wave, okay?

I did realize. And I said this in a Melody Maker interview, and I meant it to be ironic: “We’re just the next thing.” But, of course they thought I was a guy with a big ego and what I meant was, ‘We’re just the next thing, and now we’ll be jettisoned, and there’ll be the next.” And we knew that too; we knew that an artist is going to have, maybe if they’re lucky, a chance to reinvent themselves and have a second act and a third act, you know, like Andy Warhol did.

But Jean-Michel Basquiat didn’t. He managed to check out the height of his first wave, and now he’ll be remembered like James Dean. We’ll never know what would’ve happened if he would’ve done some bad movies and then had to come back and do a good one when he was 40. It’s like that.

Did the commercial success that Devo had surprise you?

That’s the only juncture I’m interested in, that fusion. It’s easy to be artsy and tedious and have shit that only the ten cool kids will listen to, and it’s easy to make commercial pap and dreck. It’s nothing. And of course we were surrounded by that. That’s mostly all we heard in Akron growing up was the crap, terrible crap. You know, “Afternoon Delight,” the Captain & Tennille.

How do you think being from Ohio colored Devo’s sensibility and/or your own sensibility?

I think we had a blue collar experience in what was even then a red state. It was anti-intellectual. It was a lot of people working in factories and in trade jobs who were conservative and Evangelical and authoritarian and religious.

And we were outside this. We were freaks, and that helps. You know, it’s an environment that’s either gonna kill you, or you’re gonna prevail, and you get out of there. And there’s a lot of good people that come out of Ohio, but they come out. They come out.

Boiling it down to the shortest description I can think of, I’ve often thought of Devo as kind of a musical critique of pop culture…

It’s certainly that, yeah. I never really wanted to be a band, I wanted us to be more like… Imagine if a group like the Black Panthers were also a music act, right? I wanted it to be a gestalt of lifestyle and politics and social commentary, a collective where music was an element, musical expression was an element. Then we’d also have films, and we’d have stores and products, and we would diversify. That was always my idea.

I’ve often thought that, on some level at least, that Devo and The Residents were kindred spirits.

Yeah, we felt that. We, of course, like them, you know? I mean, they were so theatrical and so conceptual, and they come out with a big single eyeball, you know, the all-seeing eye, the eye that sees into the future. When we heard their version of “It’s a Man’s World,” the James Brown song, they had us. They had us. Singing “I’m a man” like a castrated eunuch, that in its own way was like Devo redoing “Satisfaction.” Rather than being preening roosters, we were freaked out. You know, you could feel that we got no satisfaction!

I was fairly young when I saw Devo on Saturday Night Live, and I didn’t get it at first.

Can you help me understand the nature of Eno and Bowie’s involvement with the first album? Because I’ve heard different accounts.

David Bowie was gonna produce us, but it took a while to deal with his company, Bewlay Brothers, and the attorneys that represented him, because they were offering us a terrible deal. In the meantime, this guy Bowie’s all over the map — he’s doing this, he’s doing that, he’s doing a new film, Gigolo — and he just kept delaying. Once we worked out the deal, he kept delaying when he could do it.

And, in the meantime, the Talking Heads came out, the Ramones came out, The B-52’s released [music], Blondie releases. I’m going, “’Listen, we were there at the same time, if not before them. They didn’t know about us because we were in Ohio, but now it’s gonna look like we’re also-rans, and we’re coming out following some trend. We gotta go! David, come on!”

And he goes, “’Oh, I understand. Okay, okay. I get it, Gerry. I’m gonna fly to New York, and you’re gonna meet Brian Eno, so you and Mark come to New York. Brian says he’s ready now, and he’ll take you to the same studio I was gonna use with Conny Plank, same guy I was gonna use, and he’ll do it.” And at first, we felt like, you know, “Huh, okay. So, you know, we’re also-rans. It’s second choice,” but we met Brian, and it was like, “Okay! This is great, let’s do it!” And that was that.

It was great! I don’t think he would say it was great, because we were rejecting a lot of his more beautiful, zen ideas. At that time, we were these industrialist, brutalist, blue collar Ohio guys who’d been living with these songs for four years. And we knew we wanted them to sound nasty, and he was trying to make them pretty, because he had moved on from rock and been zenned out, and he’s doing ambient music. So, you know, he was a little bit miffed that we were not more open to him morphing these songs.

Devo has been nominated three times to the Rock & Roll Hall of Fame but never made the cut. What are your feelings on that?

Well, we’re the Rodney Dangerfields of rock and roll: we get no respect. When you see who does get it, it’s a head scratcher. It’s ludicrous! I’m done talking about it, because it’s upside down. Rock & Roll Hall of Fame is supposed to reward and recognize innovation in the field of pop music and those who moved it forward and created something new that was indelible. Well, that’s not what they’re doing.