A Conversation with Devo’s Gerald Casale (Part 1 of 3)

I recently spoke with Gerald Casale about his new EP. But as is the case when I’m lucky, our conversation explored many other topics. There simply wasn’t room for much of that in the piece I wrote for Goldmine Magazine, but I’d like to share it here. The following is an edited transcript of the most interesting parts of the conversation that didn’t figure into the original feature. – bk

Some songwriters say that songs come to them fully formed, others really really have to work at it. Where are you on that continuum?

Gerald Casale: I would think that if they were being honest, they’ve experienced the whole gamut from “fully formed” to “working hard.” Those things have come to me in all iterations of the span of what you just said. The myth is that the greatest songs were born in the moment, like the universe. It’s not really true. Yes, “Mongoloid,” I created that in an hour and a half beginning to end in one afternoon in 1976 sitting on a couch in Akron, Ohio with my bass.

But “Whip It,” that was forged over a couple months, and Mark [Mothersbaugh] had brought in little sketches that he would record on his 4-track in his bedroom and dump onto a cassette. There was no song that was the music of “Whip It.” It was four different pieces of music with different instrumentation, different BPMs, different time signatures that came in over weeks. But it was the drum beat and lyrics I had written that gave me the epiphanal moment of like, “Wait a minute! That thing that Mark did on that tape from three weeks ago, that could be the chorus, and this thing…” The beat glued it all together: one set of instruments playing these four pieces of music at one BPM, suddenly it was there, and the lyrics fit. 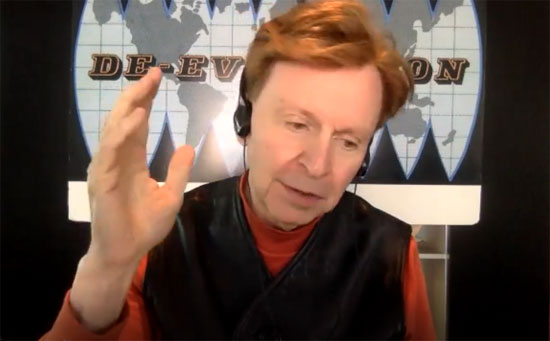 I had written the lyrics already. Those lyrics were just an exercise where I’d been reading Thomas Pynchon’s Gravity’s Rainbow where he creates these hilarious satires of limericks based on American exceptionalism like Horatio Alger: “You’re #1, there’s no one like you, you’re special.” And I thought, “I want to do one of those! Okay, I can do one of these.” I was laughing — funny as hell — and I did “Whip It.” That was my homage to Pynchon, and I had them laying around and then suddenly put these four pieces together with the drum beat that Alan did, and there it was. And everybody loved it!

This was when we were all sharing. Mark would put his notebooks down and say, “I did this” or “I drew this” or “What do you think of that?” and I would do the same. That’s the way we decided things: “Do we all want this on a record?” We weren’t sitting down like, “Let’s write a hit.” Devo couldn’t do that. But it was like we were in love with all the children, right? Anything we put on the record, we loved. Everybody was there; it was like, “Let’s go for what everybody loves. Let’s throw out what sucks.” So, if somebody really didn’t like [it] and said “That’s bullshit,” we didn’t pursue it.

But “Whip It,” once it was forming, nobody thought it was bullshit.

Your main instrument is bass guitar. How do you think that your relationship with the bass colors your approach to songwriting?

Because I’m a nuts and bolts foundation guy. It’s why I love the rural blues and early Chicago blues and early R&B. If the bass and drums aren’t doing something compelling that moves you, there’s no foundation for the song. I don’t care what else is going on.

Surveying the landscape of pop culture, there’s a popular perspective that the “rock era” is over. What’s your perspective on that?

With a certain definition of rock, I think that’s correct, and it’s not a bad thing. Because I don’t see rock as a particular set of chords and a particular beat or a particular white supremacist lyric, but the kind of rock they’re talking about is culturally irrelevant. I think that there is a place and a potential for the spirit and energy of rock to come back, but it won’t sound like the rock that they’re talking about when they say “Rock is dead.” It won’t sound like that, and that’s a good thing.

Because when you think about what made rock and roll so incredibly powerful is back to watching Little Richard, Elvis, and Chuck Berry, nothing sounded like that. The energy and the creativity and innovation of the way the song structure was put together, it had never been done, and it was all about innovation and doing it yourself, DIY. And it was sexually threatening, and you look at the audiences, and they are losing it. They don’t even know why. 20 minutes is all they needed! The Beatles never played live more than 22 minutes, and people were exhausted because what they were giving them was like Picasso.

And we’re all missing that. We all want to hear that. You don’t hear that today. I remember putting on a record that blew my mind, and that was Jimi Hendrix’s first record, it was The Who, it was Led Zeppelin, it was the Rolling Stones and the Beatles, it was David Bowie’s Diamond Dogs or “Ziggy Stardust.” We don’t have that. Everything that comes out is like, “’Oh yeah, that sounds like a little bit like they took The Clash and then they put that with it.”

Same thing with all the hip hop, same thing with all the R&B, reggaeton. It’s like a computer could’ve written it. And it’s just there to keep everybody conforming and driving down the freeway obeying the speed limit. You know, they’re dead. There’s nothing revolutionary. I wish it, I’m waiting for it. I want to hear something where I go, like an old fogey, “That’s not music!”