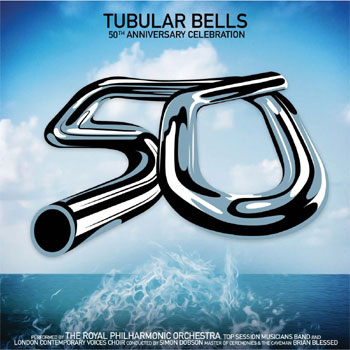 When Mike Oldfield debuted with his album-length 1972 work Tubular Bells, it was a momentous occasion. The piece – essentially instrumental save for a bit of emceeing by The Bonzo Dogs Doo Dah Band’s Vivian Stanshall – was a remarkable work. Rooted in the experimental and progressive musical idioms, Tubular Bells was accessible, playful and ambitious all at once. It also built upon the then-somewhat-new practice of one- man projects: like Paul McCartney, Todd Rundgren and Stevie Wonder, Oldfield conceived and executed the entire project largely on his own. He played all manner of instruments (helpfully enumerated by Stanshall) and worked them into the arrangement layer by layer. Tubular Bells is an engaging, exciting work, and it signaled that Oldfield had Arrived.

In fact, Tubular Bells was such an auspicious debut that it tended to overshadow most everything Oldfield would do afterward. It was something of a two-edged sword when William Friedkin’s 1973 motion picture The Exorcist used an edit from the track as its theme song. The spooky, vaguely sinister piece of the larger work has now become inextricably linked with the most notorious horror film of that decade. (I jokingly refer to it as “Love Theme from The Exorcist.” It’s no such thing, of course.)

Oldfield’s subsequent releases would be quite compelling, too; of particular interest is 1975’s Ommadawn, but all of his releases have merit. He even enjoyed a reprise of commercial success (albeit on a smaller scale) when pop-soul duo Hall and Oates released a cover of his “Family Man” in 1983 on their double-platinum H2O album. (Oldfield’s 1982 original on Five Miles Out, with vocals by Maggie Reilly, is far superior.)

And while Mike Oldfield has never seemed to want for new and creative ideas, he has revisited Tubular Bells with alacrity. In 1992 he released Tubular Bells II, a conceptually similar work this time featuring Alan Rickman as Master of Ceremonies. In 1998 Oldfield returned with – you guessed it – Tubular Bells III. This iteration used then-current musical technologies and instrumentation to give it a more contemporary character. And rather than being a single work, it would be comprised of 11 individual songs.

And then there was Tubular Bells 2003. Listeners might have begun to wonder if the world really needed so many additional entries in the series. In fact the 2003 release is a digital re-recording of the original work, boasting improved sound and whatnot. As an exercise is re-creating a classic work, it stands alongside Brian Wilson’s 2004 SMiLE reconstruction; that era seems to have been the time for such projects. Released to positive reviews, in retrospect it feels a bit redundant. By the way, John Cleese was tapped for the Master of Ceremonies role that time ‘round.

So finally here we are in 2022-23. Tubular Bells celebrates its 50th(!) anniversary of release on May 25. So, hey, why not record yet another version of the epic piece? Apparently Oldfield thought it a good idea, and he did just that. This time he goes as far in the opposite direction from the original concept as possible: instead of playing all of the instruments, he plays exactly none of them. Instead, the Royal Philharmonic Orchestra is on hand to re-create the classic work, joined by an ensemble credited as the orchestra’s Session Band. (The two-CD package does not provide personnel listings.)

The RPO does a fine job. The recording is, as expected, crystalline. The arrangement breathes, and is meticulously faithful to the original. Shakespearean/pop culture actor Brian Blessed (Flash Gordon, Henry V) is on hand for the MC part, and while his delivery doesn’t attempt to clone Viv Stanshall’s style, he’s quite well suited for the gig.

Tubular Bells runs a mere 49 minutes, something of a shortish piece by CD (not to mention concert performance) standards. As such, this program adds “Sailor’s Hornpipe” to the first disc, and the second disc showcases pieces of both Ommadawn and Oldfield’s 1974 work, Hergest Ridge.

Though it would be reasonable to assume so, Tubular Bells 50th Anniversary Celebration is in fact not a live album. It’s a stdio recording, and an extremely polished one. There have been some live performances already, in anticipatory commemoration of the work’s half-century anniversary, but Oldfield is pointedly not directly involved in those, either. As far as whether or not anyone actually needs this new set, well, that’s up to the individual. It doesn’t really offer anything new, and isn’t designed as such. But it’s consistently enjoyable, and other than acknowledging its inescapably redundant nature, I can’t level a single criticism at it. Tubular Bells 50th Anniversary Celebration is quite lovely.