With both the recent 45th anniversary of the release of Pink Floyd’s Animals and the reissue of that album in upgraded format, now is the perfect time to revisit the band’s 10th album. And with his well-established reputation as a Pink Floyd authority extraordinaire, Glenn Povey (founder-editor of the Floyd zine Brain Damage and author of the authoritative performance history of the band) would seem to be the man to write a book about Animals.

And Pink Floyd: The Animals Tour is indeed visually impressive. It’s filled with all manner of images – color and black-and-white photos (many of which haven’t been seen before), tour souvenirs, concert tickets, badges (Americans call them pins or buttons) and the like – liberally scattered throughout the book, gracing every page. 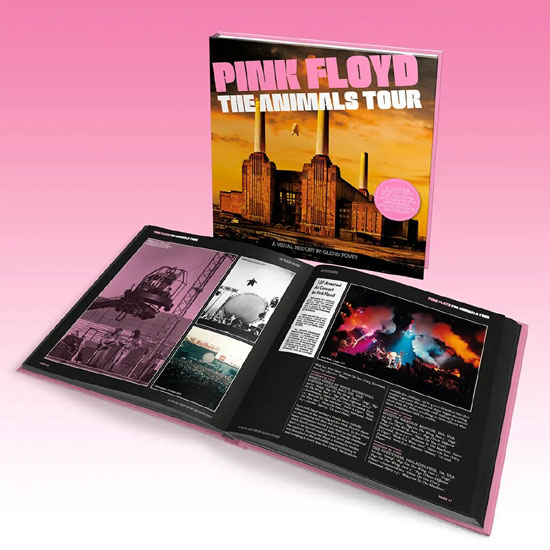 For fans who are seeking documentation of what shows Pink Floyd played on its tours in support of Animals, the book is a worthy resource. The location and set list for each show is listed. It’s worth noting that for nearly every date on the tours, the four-man group – augmented by second guitarist Snowy White and saxophonist Dick Parry – played Animals in its entirety, took a short break and returned to perform 1975’s Wish You Were Here LP start to finish. The occasional encore (“Money,” “Us and Them,” “Careful With That Axe, Eugene”) withstanding, it was the same show night after night.

Aside from lists and images, Povey goes remarkably light on words. Four brief essays – an introduction plus sections on the tour, the making of the album and a quick discussion of tour bootlegs – total a mere 3500 words. In a text-only book, this new book’s word-count would work out to about nine pages.

The essays are well-written and demonstrate Povey’s command of the subject, but offer little in the way of new information or insight, especially for those who have read his previous and essential books on the band. Pink Floyd In The Flesh: The Complete Performance History was published in 1997, and it was revised and republished a decade later as Echoes: The Complete History of Pink Floyd. To be fair, both of those titles are long out of print. Povey’s 2016 tome, The Complete Pink Floyd: The Ultimate Reference remains available and is highly recommended. Still, a remarkable amount of the content in Pink Floyd: The Animals Tour is simply recycled material from those books.

And even with the supporting material, Pink Floyd: The Animals Tour clocks in at under 70 pages total. In sum, Povey’s latest book is best considered as a coffee-table book: worthwhile as a kind of souvenir for hardcore fans who don’t own his other books, but ultimately redundant and short on Pink Floyd information that its author hasn’t shared before.