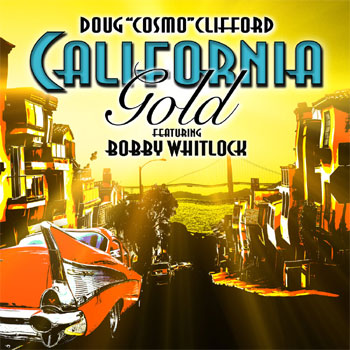 After a highly successful run, beloved rock band Creedence Clearwater Revival broke up in 1972. John Fogerty had been the group’s undisputed creative center of gravity: he wrote nearly all of the songs, sang and played guitar. But CCR might not have earned its place in rock history without the peerless rock-solid rhythm section of bassist Stu Cook and drummer Doug “Cosmo” Clifford.

Internal dissension toward the group’s end led Fogerty to insist that each of his band mates contribute songwriting to what would become the band’s swan song, Mardi Gras. By most accounts they weren’t ready, and the results didn’t approach the quality of their best work.

But both Cook and Clifford had plenty of talent beyond playing their instruments. After CCR split, Cook went on to do some historic work as a record producer, working with psychedelic rock legend Roky Erickson on the album The Evil One. And Clifford released an enjoyable solo album, Cosmo, in 1972. Lifelong best friends, Cook and Clifford continued on with a group of their own, Creedence Clearwater Revisited, playing live until retiring the band in 2020.

Along the way, Clifford recorded another album’s worth of music with some talented friends. When those sessions were completed, the master tapes went into a vault, where they would remain, almost forgotten, for more than 40 years. But now Clifford has rescued those tapes from obscurity: California Gold was released November 11.

The sessions for California Gold drew on some heavyweight talent. Clifford recalls the genesis of the project. “This was back in ‘78,” he says. “I was at Duck Dunn’s house.” Dunn had already gained great fame as bassist for Booker T & the MG’s as well as for his session work on scores of Stax Records recordings. 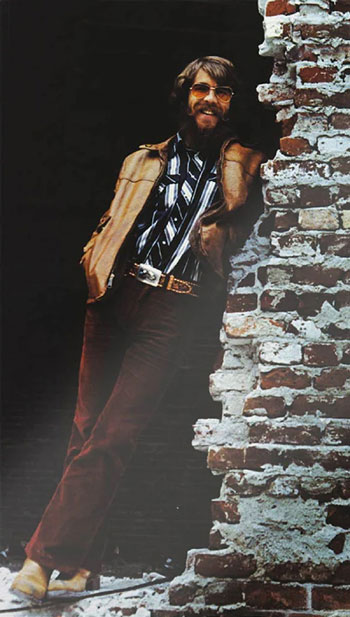 Clifford explained to his friend that he was trying to put a band together. “I’m looking for a singer,” he told Dunn. “You know anybody?” Dunn suggested Bobby Whitlock. Dunn had known Whitlock for many years, since the Stax days when the singer was signed as the first white artist on the label.

After his Stax period, singer-keyboardist Whitlock joined legendary music collective Delaney & Bonnie and Friends. From there, he and guitarist Eric Clapton formed Derek and the Dominos. But by 1978, Whitlock had fallen on hard times and was in semi-retirement. “He was pretty broke,” Clifford recalls.

Clifford was interested, and so was Whitlock, who promptly drove up from Los Angeles to Clifford’s place in the Bay Area. “We got together and started writing songs right off the bat,” Clifford recalls. Once the pair had written all of the ten songs that would eventually make up California Gold, Clifford turned to his new songwriting partner and said, “You know, we’d better record these songs, or we’re going to forget them!”

A studio lineup was assembled, featuring Clifford on drums and background vocals; Whitlock on vocals, Hammond B3 organ, piano and guitars; Duck Dunn on bass; and Mike O’Neill on lead guitar. They recorded nearly all of the songs that Clifford and Whitlock had co-written.

Songs like “Good Times” explore a grooving, funky character reminiscent of Whitlock’s work on Derek and the Dominos’ Layla and Other Assorted Love Songs. O’Neil’s stinging slide guitar is a highlight of the bluesy “Get Down Fever.” The stomping beat of “It Ain’t Like Mama Told Me” has hints of the old CCR sound. And the soulful ballad “It’s Always the Darkest Before the Dawn” has an Allman Brothers Band feel. Taken as a whole, there’s a cohesive character to the songs.

“We recorded in several places,” Clifford recalls. That lineup completed six tracks before opportunity intervened. “Duck got an offer that he couldn’t refuse,” Clifford explains. “He joined The Blues Brothers with John Belushi.” And in doing so, Clifford adds with a smile, “he became the best bass player/movie star ever.”

Billing itself as California Gold, the group did play a few live dates around that time; bassist Tom Miller filled in for the departed Dunn. “We did play about six gigs,” Clifford says. “Tom was filling the shoes of Duck, which nobody really can.”

Meanwhile, the remaining group pressed on in the studio, finishing a few more songs. But Dunn had been a key part of the sessions. “We were looking for more guys to revamp the process, to get a full band,” Clifford says. “That didn’t happen, so into the vault [the tape] goes.” And there it would remain for decades to come.

Doug Clifford says that the original idea behind the sessions was twofold. In addition to preserving the songs that he and Whitlock had written, they had hoped to create a demo recording in hope of landing a record deal. But unlike many other artists, the team that made the California Gold tapes was aiming for a polished finished product, not a rough recording that merely “demonstrated” the songs.

“That’s where I put my producer’s hat on,” Clifford explains. “Anytime I’m doing anything [in the studio], I approach it as if it’s a master [recording]. If I’m going to go in and buy studio time, I’m going to make it like I make a record.”

But with the group having fallen apart, Clifford soon turned his attention to other projects. In 1981 he played drums on Deal it Out, the third solo album by his former CCR band mate (and John Fogerty’s brother) Tom Fogerty. In 1983 he lent his drumming talents to Midnight Sun, an album by Texas legends The Sir Douglas Quintet. Along the way, he did additional live and session work for Bay Area artists including Greg Kihn and Steve Miller. And by 1995 he and Stu Cook were reunited as Creedence Clearwater Revisited; that kept Clifford busy for the next couple of decades-plus.

And then a few years ago, when Clifford found himself at home in Lake Tahoe, he decided to take the decades-old California Gold tape out of storage and give it a listen. He remembers thinking, “That’s pretty good! I think I could probably do something with that!” 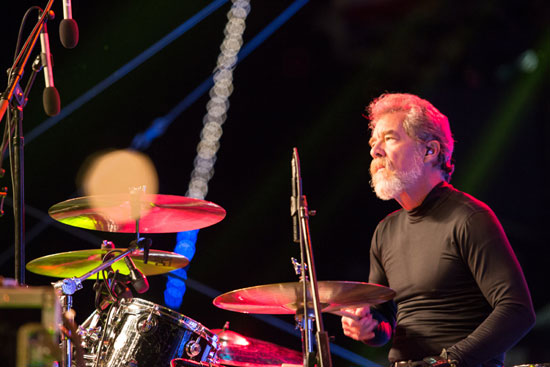 But even though the performances and recording quality were top-notch, the ravages of time had worked against that master tape. Magnetic recording tape has a finite shelf life; over time, the coating on the tape can become loose and begin to flake off, taking the recorded sound with it. Luckily, studio engineers discovered a way to preserve such damaged tapes: they’re placed in a low-temperature oven – an actual kitchen oven – and “baked” for several hours. That process can allow the loose bits on the tape to re-adhere.

But it’s a short-term solution: once the baked master tape is cooled, it’s good for about one playback. During that playback, a digital copy is made. When the process is finished, the original master is often unusable, so the digital master takes its place. And that entire process was applied to the California Gold tapes.

“I’ve baked brownies before, but I never baked audio tape,” laughs Clifford. “I was really very lucky to have everything that was in there come out playable.” He says that the process had only one mishap, and that he ended up having (and using) a better take of that track, anyway.

Thus preserved and transferred to the digital format, the California Gold multi-track masters were remixed by Clifford and Russell DaShiell, with intention of releasing the finished archival recording. But Clifford prefers not to think of the music as archival. “To me, it’s new,” he insists. “Because it has never been released [until now]. So it’s a new old record!”