Guitar shredders are a dime a dozen these days. But the real guitar heroes are the ones who balance their musical artistry with finesse, melodicism and power. Jack Starr fits that description: for more than 40 years he has been bringing his distinctive style of heavy metal to enthusiastic audiences around the globe. His band, Jack Starr’s Burning Starr, recently released its ninth album, Souls of the Innocent, and is currently touring in support of the record.

Starr comes from an American family, but he was born and grew to adulthood in Paris. “My father was working for the American government after World War II, and he stayed on for another 15 years,” he says. “I’m not sure exactly what he did for the government,” Starr adds cryptically. 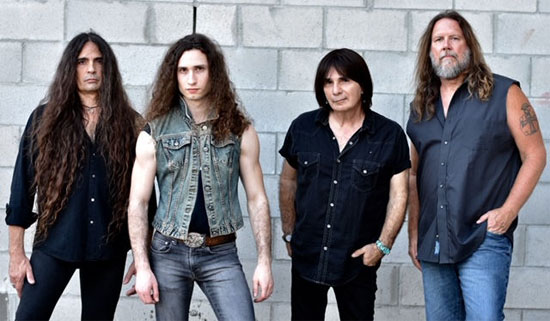 Jack Starr’s immersion in French culture had an effect upon him. When it came to music, postwar France took an insular approach to pop culture; preferring homegrown artists like Françoise Hardy, Serge Gainsbourg, Jacques Dutronc and Johnny Hallyday, known as “the French Elvis.” But that didn’t stop Starr from hearing – and appreciating – the music of his American forbears. “I listened to Motown and [other] things that were allowed to seep into French culture,” he says.

Classical music played a large role in his early life. “They play classical music on regular rotation on major radio stations in France,” Starr says. “I listened to a lot of it growing up.” And while the connection might not seem an obvious one, that music would eventually lead him to hard rock.

“I saw that there really was a strong connection between classical music and hard rock,” Starr explains. He ticks off a list of bands that explore that connection: “Deep Purple and Led Zeppelin and Emerson, Lake & Palmer and the Moody Blues and Procol Harum’s ‘A Whiter Shade of Pale’ – which was really something very similar to Bach’s ‘Sleepers Awake’ cantata – all that made me see that it wasn’t such a leap for classical and rock to fuse, to come together.”

By the early 1980s, self-taught guitarist Starr had put together heavy metal band Virgin Steele. The group recorded a demo, “Children of the Storm,” and the track was selected for inclusion on the influential U.S. Metal Vol. II compilation, released by Mike Varney’s Shrapnel Records. It would be Starr’s first big break.

“It was a pivotal moment for me,” Starr says. “I was just some young guy living on Long Island who had a bit of an ego, because everybody who plays guitar thinks they’re the next Jimi Hendrix.” He recalls seeing an ad in the pages of Guitar Player. “It said something like, ‘Do you think you have what it takes?’” He was convinced that Virgin Steele’s demo would be right for the proposed Shrapnel compilation, so he submitted a tape.

Starr says that about a week later, his telephone rang. “The guy said, ‘Hey dude’ – or some California talk – ‘you’re on the album,’” he laughs. Starr was convinced it was a put-on by one of his pals. The caller insisted that no, he really was Mike Varney. Virgin Steele’s track would indeed be featured on U.S. Metal Vol. II.

“It was really the right moment for Virgin Steele,” Starr says. “Because we needed something to hang our hats on. We had just self-financed an album, and it was really a calling card: now we could call up record stores and say, ‘Hey, we’re a new metal band, just like the other 5000 new metal bands that got in touch with you this week! But our guitar player Jack Starr must be pretty decent, because we got on this compilation thing!’”

American metal was still bubbling under at the time, but overseas, the scene was raging. The metal community in England was so strong that it developed a name: NWOBHM, or New Wave of British Heavy Metal. The Movement was spearheaded by groups like Iron Maiden, Def Leppard and Saxon, all of whom earned critical plaudits and chart success.

And Jack Starr says that Virgin Steele felt a kinship with that British movement. “We were kind of firing a salvo back at the British along with other American metal bands like Manowar, The Rods, Riot, Sabotage, Jag Panzer and Omen,” he says. “We were heralding this new kind of music, and unashamedly so.” Virgin Steele didn’t want to be mistaken for “the typical metal that was coming out of America,” which Starr says “wasn’t really metal.”

Virgin Steele’s album cover art paid a subtle tribute to the British scene. “If you look very carefully on the spaceship, there’s aliens and all kinds of crazy stuff going on but, right on the side of the spaceship, it says, ‘NWAHM,’” he says. “New Wave of American Heavy Metal.”