It’s beginning to look a lot like Christmas (Jam), Part 3 of 3

Pause, then play
After organizing the annual Christmas Jam benefit concert in his Asheville hometown for 30 years, Warren Haynes hit the pause button in 2019. “In my own view, I needed to step away after 30 years and rethink it,” he says. “It was becoming harder and harder and harder to make it happen, and it just seemed like to the right time to take a pause.” Late in the game, the announcement came in mid-November: the hoped-for 2019 Christmas Jam wouldn’t happen. But the press release promised that the all-star gala concert would return the next year.

Then Covid-19 happened. Virtually overnight, concerts and public performances of most any kind disappeared from calendars. And early optimism about a weeks-long pandemic gave way to reality. “I wanted [the Jam] to come back [in 2020], but Covid prevented it,” Haynes says. Yet as 2021 rolled around, he and his organizing team were confident that they could stage the event in December. 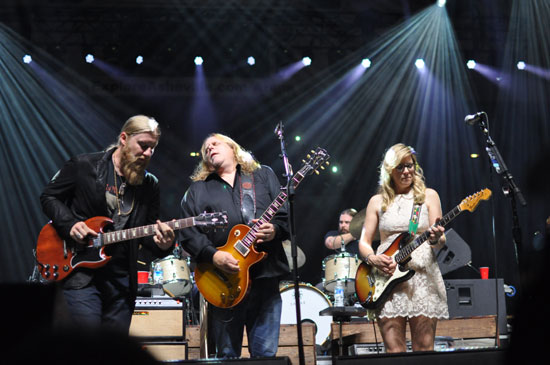 “Then we had another surge of Covid,” Haynes recalls. “We were having conference calls, and the consensus was, ‘We can’t put on a charity show that might get people sick.’ Even though people were more confident than they were a year before, we couldn’t do it.” So for the third fall in a row, there would be no Christmas Jam in Asheville.

Haynes remained busy with many other projects during his time away from planning the annual event. His band Gov’t Mule released its 12th studio album, Heavy Load Blues, in November 2021. That same year he also lent his guitar and songwriting skills to Blackberry Smoke’s album You Hear Georgia, and earlier this year he was featured on Brother Johnny, a tribute album by Edgar Winter honoring his late brother, guitarist Johnny Winter. And as Haynes told Relix Magazine in July 2020, “I have been writing more than I’ve written probably since 1987; that’s one of the few upsides to this whole [pandemic] thing.”

But time away from the Jam also allowed Haynes the opportunity for a reset. The annual event had been getting bigger and bigger; the 2018 performance swelled to two nights; the logistics involved threatened to turn a fun event into a chore for planners, all of whom (like the musicians involved) were donating their time.

So when circumstances allowed the Christmas Jam’s return, Haynes had a list of goals he hoped to realize. “One of the things we talked about was having fewer acts, and letting the bands play longer,” he says. “And to a certain extent, I think that’s gonna happen.” He promised that Phil Lesh and Friends (a supergroup led by the former Grateful Dead bassist and featuring Haynes, John Scofield, John Medeski and John Molo), Tyler Childers and Gov’t Mule would all play “nice long sets.”

But logistical concerns still put restrictions on how long those instrumental improvisations can go. “As fun as it was to have the whole folklore of, ‘The show goes until three or four in the morning,’ that’s just not the right thing to do,” Haynes says. “Half the crowd misses the show when you do that.” He says that this year’s extravaganza was set to end at 1 a.m.

Yet there’s a strong undercurrent of unpredictability with events of this type, and Haynes remains realistic in admitting that he doesn’t know what will happen or when the last act will play its final notes of the night. “Things happen at the last minute, y’know?” he says with a smile. “There are still some acts saying, ‘We might be there.’ So you never know.”

In addition to the top-billed acts, this year’s Jam featured additional performances plus what Haynes calls “floaters,” musicians prepared to help out wherever and whenever they’re asked. And Haynes’ old friend Mike Barnes is one of those floaters.

And what will Barnes do? “I never know,” he says with a laugh. “”Sometimes it’s a last-minute thing: ‘Hey Barnes, you’re gonna get [onstage] with so-and-so.’ But it’s always fun.”

Warren Haynes admits that he’s been approached about taking the Christmas Jam out of Asheville. “People have brought it up,” he says. “’What if you took it to another city? You could make so much more money!’” There’s precedent for such a move: after relocating from New York City in 2010, the annual Moogfest was an Asheville fixture for five years; it then moved again to the larger market of Raleigh/Durham.

Haynes swats down that suggestion with a simple response. “Asheville’s my hometown, y’know?” And after a longer-than-planned hiatus, the Christmas Jam is once again the hottest ticket in town. “I can’t believe it took this long,” Haynes marvels. “But I’m excited to be back.”