It’s beginning to look a lot like Christmas (Jam), Part 2 of 3

Guitarist Mike Barnes played that first Christmas Jam. Friends with Haynes since the two were second graders at Claxton Elementary, he formed the band Blue Sky with his fellow guitarist when they were 14 years old. By the mid ‘70s Haynes and Barnes co-led another group, Total Eclipse. “We did some battles of the bands, pool parties and whatever gig we could scrounge up,” Barnes recalls. “We all cut our teeth together.”

By the late ‘80s, Haynes’ career had begun to take off; he had already spent four years as a guitarist for outlaw country star David Allen Coe, moving on to work with the Nighthawks and then with former Allman Brothers Band guitarist Dickey Betts. And it was on a break between dates with Betts that Haynes returned home to Asheville. While in town, he decided to organize a get-together.

“Back then, most of us were traveling,” he says. “So it was hard to get everybody together at once, but that seemed to be an opportunity.” By his recollection, the charitable nature of the Jam came about by default. “We weren’t making very much money, and there were too many musicians to pay,” he explains, recalling the thinking: “Okay, everybody take $11 … nah, let’s just give it to charity.”

Barnes remembers it slightly differently. “The very first Christmas Jam was to benefit Ronnie Burgin,” he says. The local blues/rock musician was a longtime friend of both Barnes and Haynes. Proceeds from the fundraiser would go toward “try[ing] to get [Burgin] in rehab to stop drinking, because he was in pretty bad shape,” Barnes says. The fundraising part of that goal, at least, was a success. (Burgin died in 1993.)

But a precedent had been established. “We thought, ‘Let’s do it again next year,’” Haynes recalls. “And that next year was even bigger. Then it gradually turned into something even beyond that.” 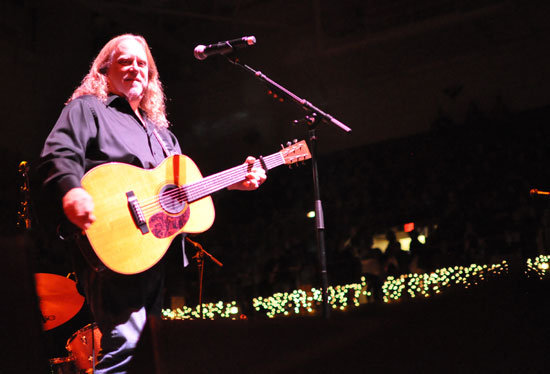 Beyond local
The Jam continued as an annual event at 45 Cherry for a few years. “One year we did two Jams for two different charities,” Haynes recalls. One took place at 45 Cherry; another was held at Sonny’s Bistro in East Asheville. That year marked the start of higher-profile musicians from outside Asheville joining the festivities. Marshall Tucker Band co-founder Toy Caldwell and Rolling Stones saxophonist Bobby Keys performed. And beginning in 1994, nonprofit Asheville Habitat became the beneficiary of the fundraising event.

By the late ‘90s, Haynes was a star. He had spent a decade as guitarist with the Allman Brothers Band, and concurrently launched his own group, Gov’t Mule. His higher profile and status in the music community meant that he could call upon famous friends to take part in his annual charitable endeavor. Jimmy Herring, Edwin McCain, Col. Bruce Hampton and Derek Trucks were just a few of the marquee names who graced the Christmas Jam stage in those years.

Along the way, the Christmas Jam moved downtown to popular venue Be Here Now. Not much larger than 45 Cherry, that location soon proved inadequate for the burgeoning event. Going forward, the Thomas Wolfe Auditorium would host the Jam, and by 2001 when that couldn’t hold it all, the event moved next door to the Asheville Civic Center (known today as the Harrah’s Cherokee Center), where it is currently held.

While in its early days the Christmas Jam focused on Southern rock, it broadened to feature a more eclectic lineup, one that can appeal to a wide array of music lovers. And that’s very much by design. “On some level,” Haynes admits, “I choose music that I like. The Christmas Jam is representative of my taste in music.” But in practice, that can mean nearly anything from “rock to blues to bluegrass to jazz to country to soul,” Haynes says. “It can really go anywhere, as long as it’s integrity-oriented music.”

Over the years, some of the most celebrated acts to take part have included Widespread Panic, Sheryl Crow, Hot Tuna, Steve Miller Band, Los Lobos, Peter Frampton, Counting Crows and a long list of other big names. And surprises often factor into the Jam: in 2018 Dave Grohl and Friends added an impromptu set at the Orange Peel. Meanwhile, the Asheville character of those earliest events is preserved by additional “Jam by Day” events at smaller venues featuring local musicians.