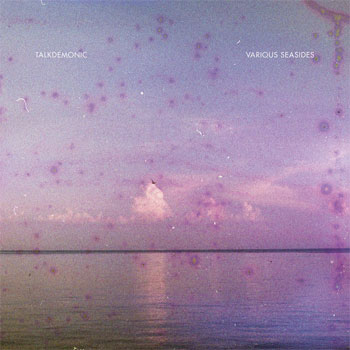 The name is a classic case of misdirection, and that’s just the beginning. Read up a bit on Talkdemonic and you might not be prepared for what their latest album sounds like. First off, they’re not a they: while Talkdemonic began as a duo project featuring Kevin O’Connor and Lisa Molinaro, today it’s just O’Connor.

Talkdemonic is described on Wikipedia (yeah, I know, I know…) as “folktronica,” but the sounds on Various Seasides — the first Talkdemonic album in more than a decade — conjure other descriptions. I hear hints of Another Green World era Eno, albeit with a more rock/pop melodic sense. The textures are willowy and impressionistic, but the melodies are at the core of these instrumental pieces.

There’s a hypnotic character to these audio miniatures. It’s easy to imagine them being recorded (and performed live, for that matter) at a volume low enough to allow rude audience members to speak over the music. (Of course they should do no such thing, especially when these lovely compositions are being shared.)

The compositions each have their own character, and while the entire collection of 13 pieces is nicely varied, the whole thing hangs together nicely as a complete work. There’s a melancholy, contemplative feel to most of the songs, and even though a great deal of synthesizers are employed, Various Seasides is a deeply organic and real-feeling record. At times, the music hints at pursuing a direction not unlike The Dream Academy, but then it pulls back, staying in its own lane. A perfectly good lane, that.

The album title suggests a thematic unity to the tracks, and at least some of the individual track titles reinforce that idea. But ultimately it’s not necessary to connect with the artist’s original intent to appreciate the understated beauty of this album. Too tuneful to qualify as ambient, Various Seasides is a rich and rewarding listening experience. And the lovely pink-swirl vinyl on my copy makes it even more special. It’s a keeper.