Traveling in Time with Pat Travers 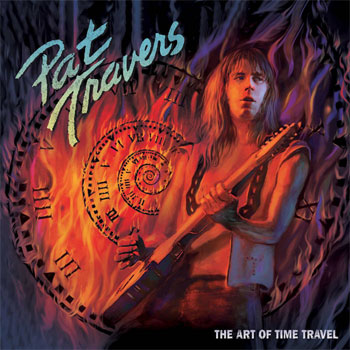 Pat Travers first came to fame in the late 1970s. After a string of solid but under-appreciated studio albums, the Toronto-born guitarist released Live! Go For What You Know, an audio document that captured the fire and passion of his live show. That pointedly-titled set brought him the higher profile he deserved, and with it came more widespread critical recognition of his work. Yet as fine as Travers’ original songs could often be, it would be his showstopping reading of the blues chestnut “Boom Boom (Out Go the Lights)” that earned him his album chart position and eventual Platinum status for the release.

Still, for reasons completely beyond Travers’ control, popular tastes underwent a seismic shift as the 1980s began. Seemingly overnight, MTV-oriented material crowded out other styles including blues-based rock. And though Travers’ next album included a minor hit single in “Snortin’ Whiskey,” its title – Crash and Burn – seemed both prescient and apropos. Even though subsequent releases would receive good critical notices, Pat Travers’ days of significant chart action were behind him.

But he didn’t give up. A 1990 release, School of Hard Knocks, followed on with Pat Travers’ predilection for on-the-nose album titles. The same would be true for several subsequent releases: his dogged optimism shone through when titling 1995’s Halfway to Somewhere and Lookin’ Up from 1996. And the title of another well-regarded live set from 2007 demonstrated both Travers’ commitment and his self-effacing sense of humor: that record was called Stick With What You Know: Live in Europe.

Coupled with his high-energy musical approach, the guitarist’s foundation in the blues helped keep Travers in the public eye, albeit with a much lower profile than his late ‘70s salad days. And intriguing albums like 2019’s superb Swing! showcased his ability to recast classic material – in this case, pre-rock and roll music – into his signature style.

August 2022 saw the release of the latest studio album from Pat Travers. And once again the guitarist has crafted a title that telegraphs what the music is about. The Art of Time Travel is a collection of new songs, many of which sound like sure-fire chart-toppers… if one could pilot a time machine back to 1979. When that’s pointed out to him, Travers laughs heartily and agrees. “This would be a hit in 1978 or ‘79, for sure,” he says.

While Travers is focused upon the here-and-now, he readily weighs in on what he believes made guitar heroes a popular phenomenon in the late ‘70s, and offers his perspective on why they’re less of a force on today’s musical landscape.

“There’s just something about a confident guy onstage with a guitar,” he says. “I don’t know why, but it’s true.” And he believes that the distinctive sound and style of some of that era’s axe-wielders played a part in their success. “You could identify who was playing within just a few notes,” Travers says. “They all came up with these signature sounds that were really exciting.”

Today, Travers believes, that’s no longer the case. “There just seem to be so many guitar players, and you can’t tell one from another,” he says. “They really all kind of sound the same.” He cites the recent example of hearing a well-known guitarist guest on a track by an equally high-profile singer. “It just sounded like [the vocalist’s] music and any good rock guitar player,” Travers says.

Against that backdrop, Travers felt that his approach to making what would become The Art of Time Travel should look to the past. “There really was an intent to make an album like I used to make an album,” he says. Noting that in today’s musical world, new records can be put together and released very quickly, Travers says that he took his time.

He says that in the old days, he could take a few months to create a new album. And while the global pandemic has been tragic in many ways, it had a few select good qualities. Travers, who would typically have a full touring schedule, found himself at home in Florida. “The pandemic gave us lots of time to work on the album,” he says. “So I was able to go back and forth and make sure that I was really happy with the songs.” 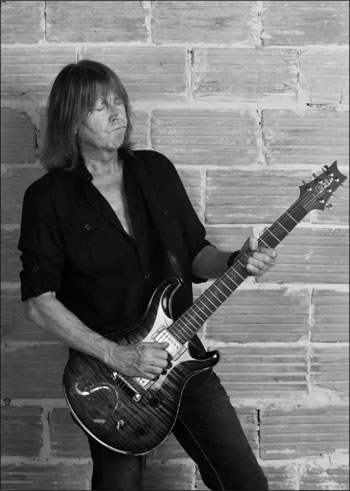 One of those songs is the single “Ronnie,” Travers’ heartfelt tribute to Ronnie Montrose. The San Francisco-born guitarist inspired a generation of electric guitar players, Travers among them. Travers was still a teenager when he heard Montrose’s recorded debut, the eponymous 1973 debut from his band. “They sort of captured an American version of what Led Zeppelin were originally doing,” Travers says. “Sammy [Hagar] and his high vocals, and Ronnie with his rough and ready guitar riffs: I loved them!”

Travers would eventually meet Montrose; the pair hit it off and became friends. They would eventually play some live dates together. And Travers’ tribute to his friend – who died in 2012 – makes his admiration plain with lyrics praising Montrose’s “vicious licks.”

The core of the music on The Art of Time Travel is Travers’ power trio: him on guitar and lead vocals plus drummer Alex Petrosky and bassist David Pastorius (nephew of jazz great Jaco Pastorius). The three musicians create a powerful yet always-melodic sound for the ten cuts on the record. “When you have just a three-piece,” Travers enthuses, “we can come down to a whisper, get loud and blow the roof off the place, and everywhere in between.”

Those dynamics and the compact versatility that comes from the trio configuration are keys to what makes Travers’ music work. But on several of the tracks on The Art of Time Travel, Travers builds on that foundation, adding other sonic elements that take the music beyond the power trio format.

“Push Yourself” is one of the new tracks that features a four-piece horn section augmenting the trio. While it’s a hard rock tune, its use of brass connects it to Swing! and its focus upon songs from the big band era of the 1930s and ‘40s. “The sax and trumpet players of those days were like rock guitar hotshots,” Travers says. “That was the hard rock of the day. Instead of having four Marshall [amplifiers], they had four saxes.”

That tune and other also benefit from massed vocal overdubs that thicken and add texture to the arrangements. “That’s my wife Monica,” Travers says. “She’s my secret weapon. I’ll have her sing four notes in a chord where I may not play that [chord] on the guitar itself.” The added voicing provides a musical contrast as well.

Depending on how one counts, The Art of Time Travel is something like the 40th album from Pat Travers. Yet despite the 68 year old guitarist’s prodigious output – nearly an album a year since his self-titled 1976 debut LP – it’s onstage where Travers and his band shine brightest. These days, their gigs are a mix of festivals and smaller venues. And while some artists approach different venues with a different kind of onstage delivery, Travers brings his good-natured, high energy vibe to every show. “I might be a little quieter when I talk on a mic in a theater,” he says with a chuckle, “but everything else is pretty much the same.”

You may also enjoy my previous conversation with Pat Travers, found here and here.