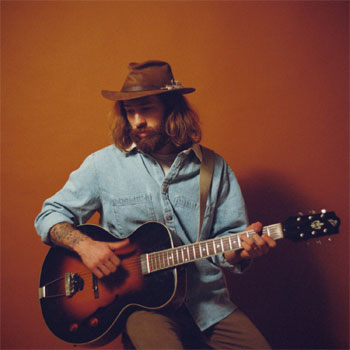 Singer-songwriter Sam Burchfield grew up in the South Carolina foothills of the Blue Ridge Mountains. That regional and cultural background forms the foundation of his original music. He debuted on record with a 2014 EP, Where to Run, and followed that up with a 2020 album, Graveyard Flower, and his latest release – his best work yet – Scoundrel. He’s currently on a tour of the Eastern seaboard.

How do your southern Appalachian roots inform the music that you make?

Those roots are a part of who I am; you can’t really escape that. The biggest through-line between growing up in the area and the music I make is the connection to nature. When I was ready to make Graveyard Flower – which is the album before my latest, Scoundrel – my wife and I were talking: “What is important that I want to talk about in my music?” It ended up being [the idea that] our connection to nature is essentially our connection to each other. The more separate we are from nature, the more conflict there is between people.

Your musical approach has one foot in tradition and the other in the here-and-now. Is there a tension between those two forces?

Yes, and there should be a tension. That’s just the yin/yang of being. The past means traditional folk songs, but it’s also the past of your own artistic journey. When I listen at some of my earlier work, it would be easy for me to want to take some of it down, because it [doesn’t reflect] who I am now, but it’s who I was. So I should see that as part of my journey.

But I don’t want to only be that. I want to also look toward where I’m going and where I want to be. And I think every artist does that in some way. In hindsight, you might see them in a small box: “This was an Appalachian folk artist in that era.” But in that moment, they were [drawing] on past music, and also pushing it forward at the same time.

Is there a particular worldview or perspective that you aim to get across with your music?

I really am trying to be true with my music. I’m asking a question or working through something, really trying to dig into it. On the surface, a song on Scoundrel might have an outlaw character. That’s an archetype that we all know. But then the song digs into what that means and how that plays out: “What is it to be good or evil?” Within the bounds of a story, I like to have layers within the lyrics where I’m digging into deeper meaning.

I really love lyrics. I love that aspect of songwriting. The music is what sort of draws people in, and there’s a felt connection, but the lyrics are how you take that a little bit deeper. It’s the words that really settle into meaning, I think.