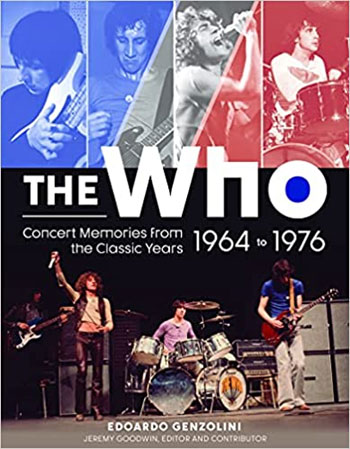 In the third decade of the 21st century, it’s challenging to come up with a book that sheds any new light on the music of the 1960s (yeah, says the guy whose first book is about Pink Floyd, ha). And there have been countless books about The Who, including a superb one about a decade ago by Richie Unterberger. So one might well approach the release of yetanotherwhobook with a degree of skepticism.

That’s a fair and healthy approach, but spending even a few moments leafing through the weighty new book from Edoardo Genzolini will put any concerns to rest. The Who: Concert Memories from the Classic Years, 1964 to 1976 takes an approach that’s fresh, new and lively. As the author explains his forthright and essential preface, Concert Memories is “the reflection of what my thirteen-year-old self would have loved to read about The Who from someone else […] the story of the band from the same perspective that I was seeing them: that of an audience member and listener with a direct eye and ear to their live performances, their societal stage.”

Yeah, Genzolini writes that way, cutting right to the heart of the matter, making his goals plain and straightforward. And for that reason, it’s tantalizing to wonder what sort of book he could have written using only his own thoughts and words. A highly readable one, no doubt.

But that’s not his approach here. Instead, he does indeed cast a wide net, including the words of many, many different people. What they all have in common is an appreciation for The Who. But that’s not all: as the book vividly demonstrates they also share among them a knack (like Genzolini) for clarity of thought, good humor and – this is key – pretty good memories. They go some great distance to putting the lie to that old saw about “remembering the sixties means you weren’t there,” yada yada.

Even for those who consider themselves well-versed in The Who arcana and history, these reminiscences – some quite brief, some more lengthy – are sure to add to their appreciation of the group, their music and their place in history. For readers (like this writer) whose tastes run decidedly away from “oral history” type books, fear not: there’s a linearity about these written memories. And in fact Genzolini does write rather extensively in his book: each chapter begins with a scene-setting essay/overview by the author, who knows well how to drop in a quote to help hammer home his point.

Have I mentioned the visuals? I have not; serious omission on my part. Let’s correct that here in graf six. The graphics are amazing. Drawing again from the articulate fans who provide written memories, Genzolini has amassed an absolute treasure trove of photos and memorabilia, including it in vivid color and black-and-white. The amateur photos of (for example) The Who onstage in Ann Arbor, Michigan in 1967 are up-close and personal and – with due respect to great professional photographers – capture something about the band’s essence that pro shots sometimes fail to do. Even the hardest of hardcore Who fans will find image after image, the likes of which they’ve never before seen. 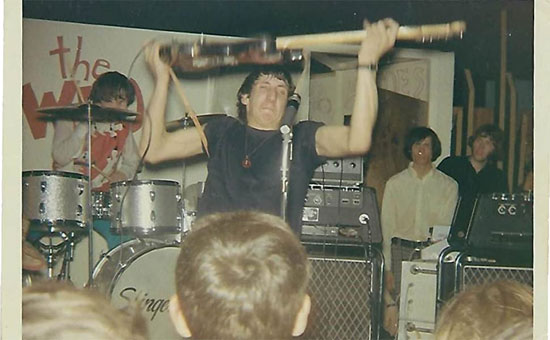 Spend time with the Who fans who populate the pages of The Who: Concert Memories from the Classic Years, 1964 to 1976 and you’ll likely develop a kind of kinship with them. They were there (wherever there happened to be at the time) and now they’re sharing their personal perspectives with you. Genzolini is to be applauded in the most enthusiastic manner possible for putting together this treasure of a book. In doing so, he may well have created a winning template for treatment of the histories of other important groups.

I just hope he hasn’t somehow copyrighted the idea (wink, wink). In any event, this book is essential. Buy it for yourself, and/or for The Who fanatic in your life. C’mon now: let’s see action, as Roger might sing.