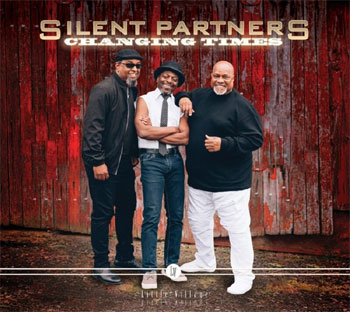 The stirring, evocative strings that adorn “Ain’t No Right Way to Do Wrong,” the opening track on Silent Partners’ debut album Changing Times, serves notice that the group is no rote blues trio. With a feel that hearkens back to classic soul sides of the ‘70s, the tune is a slow burn that establishes the group’s complete mastery.

Silent Partners is a three-piece featuring studio and performance veterans Tony Coleman (drums), Jonathan Ellison (guitar) and bassist Russell Jackson. It’s one of many components of the trio’s strengths that all three men are accomplished vocalists as well. Collectively and individually, the three musicians have credits that include work with Bobby Bland, B.B. King, Denise LaSalle and Johnnie Taylor.

Drummer Coleman does an impressive B.B. King vocal impression on the good-natured “Never Make Your Move Too Soon;” appropriately enough, the song tells the story of how he came to work with King in Chicago. The group shifts into high gear for the rollicking “Dancin’ Shoes,” a showcase for Eliison’s lean and mean lead guitar in an Albert Collins vein. The whole album has a tight and energetic yet relaxed vibe that suggests how the band might sound live onstage, but it’s a safe bet that tunes like “Dancin’ Shoes” would take even higher flight on the bandstand.

The swaying “Love Affair with the Blues” splits the difference between super-charged Chicago blues and the kind of blues-rock epitomized in the late ‘60 by Jimi Hendrix. Well-placed bursts of lead guitar offer a tasty contrast with the song’s quieter moments. “Proving Ground” is a funkified workout that underscores the versatility of this outfit. It also demonstrates that a song need not have a bunch of chords to be effective (this one rarely ventures beyond two of ‘em).

The smoky, assured “Teasing Woman” features some especially beefy bass work from Jackson. The song’s economical arrangement keeps the focus where it belongs: on the three core instruments and the peerless vocal. “Good to Myself” is classic guitar-led blues, with a wonderfully extended instrumental intro, some inventive changes and a spirited outro.

Silent Partners wrap with “Beale Street Shuffle,” a loping tune that has it both ways: it pays tribute to the urban blues that have come before and provided a solid foundation, while looking toward the future. And with a debut like Changing Times under their belt, the future looks bright indeed for Silent Partners.