A ‘Songversation’ with Rissi Palmer 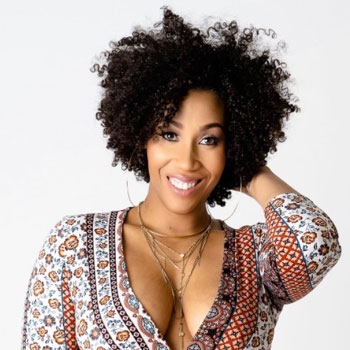 It’s a misrepresentation of history to consider country music the domain of white people. Many persons of color have helped to shape the American musical form, and their contributions have been important ones. Burnsville N.C. native Lesley Riddle, Charley Pride and Grammy Award winning artists Dom Flemons and Rhiannon Giddens are among Black artists who have made important marks on country and folk music. And those names are but a sampling.

As a Black woman in country music, Rissi Palmer may have had to work harder than most to gain her place in the scene. But through determination and sheer talent, she has done that and more. Today Palmer is a successful recording artist; touring performer; radio, television and podcast personality.
And from the start, she turned challenges into opportunities. “There were times in the first part of my career that I felt like a novelty,” she admits. But Palmer acknowledges that sometimes novelty can open doors. “People may have been like, ‘Oh, she’s a Black country singer; I’m curious about this.’ So they come to see. But talent is what gets them to stay.”

Palmer says that she could choose to be hurt and offended by that initial skepticism. But that’s not her way. “I use it as a motivator,” she says. When she finds herself in a situation where she’s seen as something new and unusual because of her race, she turns things around. “In those situations, I like to show you that, actually, I should’ve been here all along.”

And in fact she has been. Rissi Palmer’s childhood was spent in Pennsylvania and Missouri, but both of her parents are Southerners, and their musical tastes made a deep impression on her. “Both my mom and my dad are from Georgia,” she says. So she spent a lot of time in Georgia, listening to the country music that her family loved. She believes that her immersion in country music was “more nurture than nature.”

Palmer has always had a deep affinity for what she calls “vocal-forward” music that tells stories. So while she names country superstars like Patsy Kline, Dolly Parton and Kenny Rogers as inspirations, her original music reflects the influence of artists like James Taylor, Phoebe Snow and Lionel Richie as well. “A lot of Lionel Richie’s music is written like country songs,” she says.

Country music’s focus on storytelling – and the give-and-take that comes from the storytelling tradition – drew Palmer into the music. “I grew up liking to tell stories, and I liked to get a reaction from the stories that I was telling,” she says. And that approach would inform her approach to public performance.

“I talk a lot to the audience,” Palmer says. She cites a neologism coined by India.Arie to describe her own approach. “I like to make it ‘songversational.’ I’ll tell y’all a story, and I let you know what my motivation was behind writing the song, what I was thinking about,” she explains. “And I invite you to react to what I’m saying and how I’m feeling.” That two-way communication transforms a Rissi Palmer concert into something more than a performance.

And Palmer makes use of that back-and-forth in other ways, too. She and her band try out new material in front of live audiences. “Soul Message” from her third album (2019’s Revival) was written a decade before it was recorded. “It sounds different from when we first started,” she says. “And that had everything to do reaction: how the audience reacted to it, how the band reacted to it, how I reacted to it. Feedback plays a huge role both in my live show and in my music.”

As much as its possible in today’s society, Palmer can be thought of as a post-racial artist. When it’s pointed out that she was the first woman of color in 20 years to get a song on the country charts (2007’s “Country Girl”), she admits that at the time, she didn’t even notice. “I wasn’t aware of that superlative until it happened,” she says. “While I was excited – because that’s a big deal as an independent artist, as a new artist and for my very first single – it was kind of bittersweet. It’s sad that in the 2000s there are still ‘firsts’ for Black people.”

Even with a thriving and creatively fertile music career, Palmer remains best known to many for her other pursuits. “Especially in the last two years, a lot of people think of me as a host and a talking head,” she says. Then she adds with a laugh, “I’m like, ‘But I have all this music over here!” Yet in the end, Palmer believes that however one is being introduced to new audiences, the most important thing is that they are being introduced. “I look at it as different facets of the same diamond,” she says. “Making music and singing is my #1 passion and first love. And anything that gets me back to doing my first love, I can’t really be mad at.”