More From My Chat with Graham Nash

I recently had the bucket-list experience of chatting with Graham Nash for a feature previewing one of his live dates. There were lots of interesting bits that didn’t find their way into that feature, and it would be a shame not to share them with my readers. So here they are. –bk

NOTE: The original feature — no overlap with what’s below — is HERE. 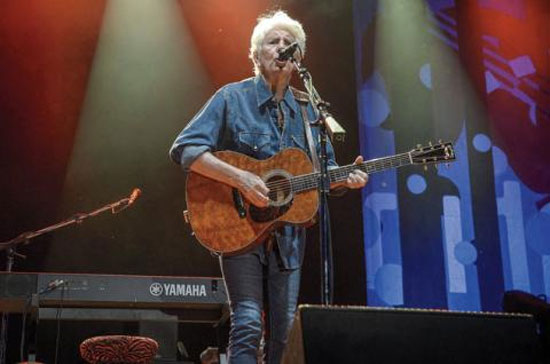 I’ve been listening to the new live album in which you’re covering your first two albums, and I’m really enjoying it.

Well, I appreciate that. We only did four shows like that, and to be able to choose the best performance of each song and make a live album was really fortunate.

Those songs were written more than a half century ago. When you were writing them, did you have any thoughts of that music lasting into the future?

No, it wasn’t even a concern. Who the hell knows what’s going on? But I’m telling you this: at 80 years old looking back at my life, I’ve been very fortunate.

Was there ever a thought of setting some of those songs aside for one of those other projects, or did you always have the sense, as you were writing, that “These are my solo songs”?

We had something going on like this: We’d just done Déjà Vu and nobody was recording. I had all these songs, and I needed to get rid of them. So that’s what I did. I think that the secret of why they were so popular was that they’re immediately available to you.

As you’ve been revisiting the songs, is there any sort of desire to tinker with them, or do you think “You know what? I trust that young man the way that he did those songs, and I’m going to just run with that”?

My wife, Amy Grantham, persuaded me to do [those live dates’. She said, “I want to see that show. I want to see Songs from Beginners and Wild Tales. Come on, get going!” And so I did. Like I said, we recorded four shows with a band I’d only played with for a week and, when you take all that into consideration, it’s an incredibly fine piece of work.

I’d be remiss if I didn’t comment upon the sterling quality of your vocals at 80.

I don’t understand it either, but it is one thing that I know that I took as an incredible compliment. There is a man in our business who is a mastering engineer – his name is Bob Ludwig – and he’s probably mastered, you know, 1000 of the biggest hits, right? I’ve been working with him for 50 years, but we have never talked personally and, one day, I got an email from Bob. He said, “Look, I’ve got to tell you something. I worked on the original Songs for Beginners, and I worked on the original Wild Tales, and I’m telling you now: you’re singing better now than you did then. What the fuck is happening?”

What can you tell me about the album you’ve made with Allan Clarke?

I got an email from Allan one day, and he said, “I’m starting this solo record, and I’d really love it if you’d sing a couple of songs with me.” Now, he’s been my oldest friend. I met him when I was six years old, and now I’m 80, so figure that out: 74 years, you know? And I thought, “No problem,” but he kept sending songs, and I kept liking them, so I kept singing. So, he’s got a solo record, an Allan Clarke record, coming out on BMG probably in the spring, and I’m singing on every track.

Your book, A Life in Focus, showcases the visual side of your creative expression. Outside of music, art, and photography, what do you do for pleasure and recreation these days?

Well, first of all, I married Amy Grantham five or six years ago, and I have been watching her grow immensely. If you don’t know what I’m talking about, go to amygrantham.com and see her work. It’s been my pleasure to watch this artist bloom. So, that’s what I’m doing! I’m helping her with her future.

What’s next for you musically after this run of dates is completed?

I’m in a strange position, and I’ve never been in this position before. I have an album, a solo record, already completed, already mixed, already mastered, already got the cover, and that will be out in about four months. It’s called Now. And it’s probably my most personal record, even though Songs for Beginners was somewhat personal. The opening line of the entire album is “I used to think that I could never love again.” And then it goes on for, you know, 12 tracks.

Do you plan on touring in support of that as well?

Of course! As long as I can.