Joe Satriani: Telling Stories With and Without Words (Part 1 of 2)

Joe Satriani is the most popular instrumental rock guitarist in the history of music. Though he has yet to win a Grammy Award for his work, Satriani is one of the most often-nominated artists (15 to date). His albums and live performances meet with near universal critical acclaim, and his total record sales to date exceed 10 million units.

In addition to his own thriving career – marked both by solo tours, his G3 concert tour series, his G4 Experience guitar camp and his 19th album, 2022’s Elephants of Mars – Satriani has long been an in-demand musician, sought for his expertise playing live and/or in the studio with Blue Öyster Cult, Alice Cooper, Deep Purple, Mick Jagger, Spinal Tap, the Yardbirds and many others. In his spare time he’s also guitarist for supergroup Chickenfoot. 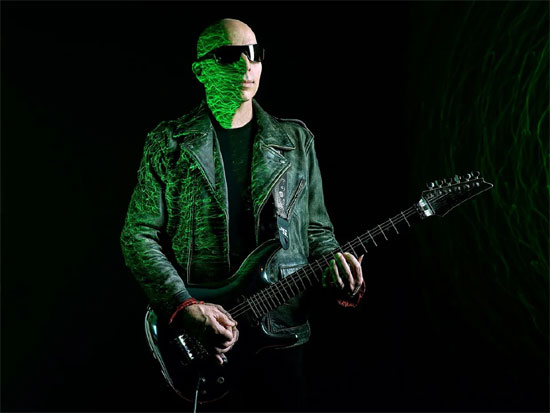 While Satriani is a deeply technical player – in musician’s parlance, a “shredder” – from the very beginning his work has been distinguished by a strong emphasis on melody and accessibility. And that’s very much by design. “I try to keep a very strong melodic floor to even the craziest solo,” he says.

“When I sit down to turn some feeling – whether it’s simple or very complex – into music, I’m trying to do two things,” Satriani explains. “One, I’m trying to get it right for myself. I’m trying to prove to myself that I’m translating this inspiration correctly into music.”

But that’s only half of the equation. “I also want to see if I [communicate] that story to my audience,” he says. And Satriani acknowledges that where instrumental music is concerned, much is left to the listener’s imagination. “It has this great power of allowing the listener to reinterpret it,” he says. “And that goes back to a broader meaning of music.” Satriani believes that human beings need music. “And when we put on a piece of music to help us celebrate or commiserate, we’re making the choice to use that music as we see fit,” he says And that might or might not line up with the composer’s original intent.

He provides an amusing example to illustrate his point. “I write a song about diving off a cliff into a beautiful mountain pool of crystal clear, freezing cold water. And someone may hear it and think, ‘This is the perfect song for when I need to write code for my software project!’” Satriani emphasizes that ultimately, the artist gives up control over the song’s meaning when it’s shared with the wider audience. “I write a love song, and they think it’s sad,” he says with a chuckle. “I write a sad song, and they use it as a love song!”

And Joe Satriani is okay with that. “That is the beauty of it,” he says. And that delightful disconnect is part of what separates instrumental music from songs with words. “If [a tune] has lyrics, of course, then you’re kind of forced to know what it was that the artist is trying to tell you,” he explains. “But when you hear ‘Moonlight Sonata,’ you can decide for yourself: ‘This song is about this, today.” And Satriani keeps this reality in mind when he writes music.

The acclaimed guitarist has a fertile mind when it comes to creating memorable melodic lines. One of his early breakthrough tunes was the soaring instrumental “Always With Me, Always With You,” an elegiac track from his second album, 1987’s Surfing with the Alien. The song combined lightning-fast fluid runs with a fetching, ballad-like melody. The track earned Satriani the first of those many Grammy nominations, in this case for Best Pop Instrumental Performance. 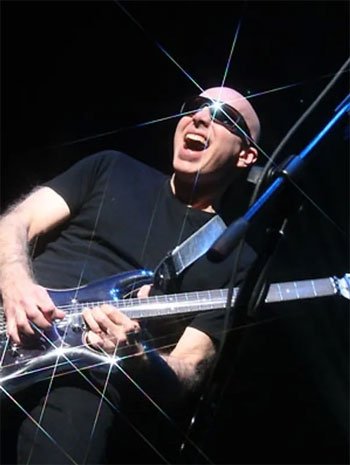 And though he’s written hundreds of songs since then, Satriani exercises strict quality control. Not everything he composes (or records) finds its way onto a Joe Satriani album. “I think every project has a couple of songs that leave you scratching your head,” he says. “Halfway through, you go, ‘I thought that was going to be great.’” In those cases, he puts the song off to the side and moves on to something else.

When he’s working on an album like The Elephants of Mars, Satriani says that he routinely brings a lot of material to the project. “I’ve always got 20-30 songs,” he says. “Sometimes 50.” As the project progresses, some inevitably fall by the wayside. Others are reworked, and the best ones make it to the finish line. And if the plan calls for the record to include ten tracks, he might decide to complete a few extras. “Some people on my team are saying, ‘Give 10; don’t give many more.’ And other people are saying, ‘You might as well work on 16, because you never know.’”

And in Satriani’s case, you really don’t know. “The last day in the studio, you might decide that four of them aren’t quite ready yet,” he admits. Satriani has a good sense of which among his songs are best suited for each album, but he listens to people he trusts, too. “Even the record company – filled with really talented people who do this all the time – can listen to an album and get surprised and say, ‘You know that song we thought was [a deep album] track? I think it’s the single!’”

But even if a song ultimately doesn’t make the cut, Satriani holds onto it. “I do a record just about every two years,” he explains. “Sometimes I do a song, and I don’t quite know how to finish it. And then two years later, ‘Now, I get it. This is what I was trying to do, and I’ve gotten better, so I can finish it now.’”