David Bowie was one of popular music’s most groundbreaking artists. He was the Space Oddity, Ziggy Stardust, the Thin White Duke, the Low-era Man Who Fell to Earth, the plastic soul man of Young Americans, and even the unabashedly commercial pop artist of Let’s Dance. Reinventing himself with each successive album and tour, Bowie fully committed to each successive persona, exploring it to his satisfaction and then moving on. In the process, Bowie – who passed away in 2016 at age 69 – indelibly influenced the musical and cultural landscape.

A collective of acclaimed musicians led by associates of the late musician have mounted a touring tribute, Celebrating David Bowie. The tour – featuring guitarist Adrian Belew as one of its marquee performers – came to the San Jose Civic October 8. 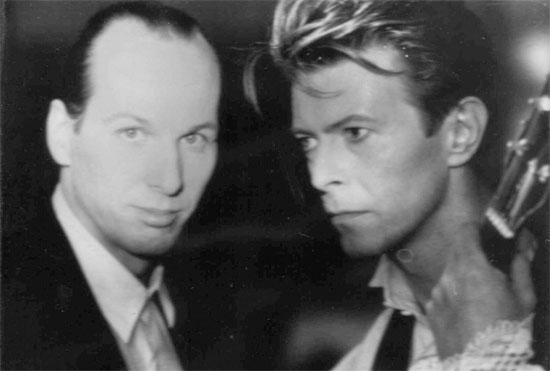 Adrian Belew has a staggeringly impressive pedigree as well: concurrent to a solo career, he’s worked with Talking Heads, Tom Tom Club, Nine Inch Nails, Tori Amos and many others. He led art rock/pop band the Bears through the late ‘80s, and fronted King Crimson for most of its work between 1981 and 2013.

But as early as 1977, Belew had already proven himself as a superb and technically proficient musician, earning a spot as “stunt guitarist” with one of music’s most demanding band leaders, Frank Zappa. And that gig would lead to another opportunity.

Bowie’s collaborator of that period, musician/producer Brian Eno saw Belew play with Zappa at a Cologne, Germany concert. Eno was impressed, and told Bowie, who was looking for a guitarist for his own upcoming tour. “Two days later,” Belew recalls, “we were in Berlin, and David came to the show there, and I met him right on stage. By the end of that evening, I was offered to play on his tour.”

Belew’s tour with Bowie was supposed to last four months, but ended up lasting a year and half; it was documented on Bowie’s 1978 double live album, Stage. Working with Bowie proved to be vastly different than playing with Zappa, Belew explains.

“With Frank, it was not about creative latitude,” he says. “It was about playing what was already written by him. But David was cheering me on, saying, ‘Do everything you want, and go wild! That’s what I want. I want you to just color as much as you can with the guitar.’” Belew reveled in that creative freedom. “It was instrumental in setting the pace for a lot of my career,” he reflects. “From that moment on, that’s what people called me for: to let me do what I wanted to do.”

Bowie adopted an even more free-form and unconventional approach when he brought Belew into the recording studio to work on sessions for his Lodger album. “That was my first actual studio record,” Belew says with a laugh, noting that the album’s working title was Planned Accidents. Belew would be tasked with adding guitar parts to an already-recorded backing track. “I asked, ‘Can I hear the song first?’” he recalls. He was told no; moreover, neither Bowie nor Eno would reveal the key in which the song was played. Belew’s wild and extemporaneous guitar work on tracks like “Boys Keep Swinging” and “D.J.” are among Lodger’s most compelling qualities.

A decade later, Bowie again enlisted the talents of Adrian Belew, this time asking the guitarist to take on the role of band leader for his Sound + Vision Tour. In keeping with Bowie’s always-changing nature, this time the tour required Belew to learn a long list of demanding songs, and to arrange complex songs in a way that a four-piece band could play them. Belew says that doing so took “months of work… trying to replicate to some degree songs with orchestras, saxophone sections, every manner of thing. It was a lot of work, but it went really smoothly.”

Coupled with his other work, all of those experiences make Adrian Belew an ideal artist to help bring the current Celebrating David Bowie Tour to life. But he’s quick to note that doing justice to Bowie’s body of work takes a team. He’s joined by guitarist and singer Todd Rundgren, band leader Angelo “Scrote” Bundini and six other accomplished musicians.

“That’s the beauty of this show,” Belew says. “We have different people who can [cover] different parts of David’s career and do them well. So, it’s not one singer trying to sound like David the whole time. We have six different people taking on whatever material they’re suited for.” And that seems apropos when paying tribute to a man whose music displayed a myriad of personalities.