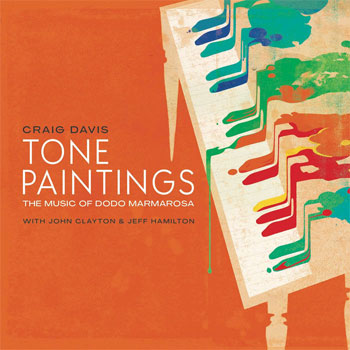 Pianist Michael “Dodo” Marmarosa was a bebop musician whose most celebrated period was the 1940s to ‘60s (he passed away on 2002). In his early years, he played with a number of the highest-profile bands including those led by Tommy Dorsey, Artie Shaw and Gene Krupa. Later he worked extensively as a sideman, and occasionally as a band leader. A new recording by Pittsburgh-born Craig Davis honors the work of hometown hero Marmarosa.

Working as part of a trio with upright bassist John Clayton and drummer Jeff Hamilton, Davis explores Marmarosa’s catalog, delivering energetic and expressive readings of ten classics. The tunes swing gently, with balanced emphasis on melody, subtlety and groove. An original tune, Davis’ own “A Ditty for Dodo” is an homage to Marmarosa’s style; if one didn’t know otherwise, they might mistake it for one of his tunes.

A highlight of the set is the vaguely bossa-nova styled “Opus No. 5,” and the kinetic “Battle of the Balcony Jive” is the most uptempo of the set. The impressionistic and melancholy “Dodo’s Lament” closes the collection. Taken as a whole, Davis’ selections display the breadth of Marmarosa’s compositional and arranging style, and may well spur listeners to rediscover the late pianist’s body of work.