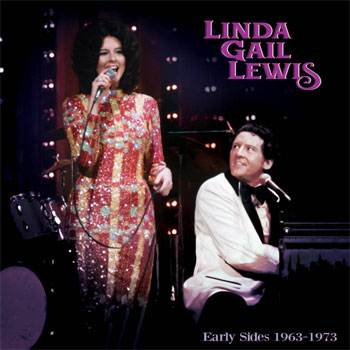 Rock and roll history is scattered with sibling also-rans. Some are quite good: Mike McGear (Paul McCartney’s brother) made an excellent album with Roger McGough and another very good one of his own. Others are less spectacular, or – fairly or not – never caught the attention of the listening public.

Linda Gail Lewis certainly belongs in the first category. With a sound firmly rooted in early rock and roll, the sister of Jerry Lee Lewis made music in the ‘60s that bridges the gap between what the Killer did and the approach of Wanda Jackson. A new collection brings together 18 sides cut between 1963 and ‘73.

With excellent, knowing production by such figures as Scotty Moore, Shelby Singleton and Jerry Kennedy, the songs on Early Sides demonstrate Linda Gail Lewis’ range. Backed by ace players, she tackles a variety of material from the saucy rockabilly of “CC Rider” and “Ain’t Nothin’ Shakin’ (But the Leaves on the Trees” to the uptempo pop-with-strings of “Break Up the Party.”

Even when syrupy Nashville strings threaten to overwhelm (as on “Small Red Diary”), Lewis strong vocal delivery keeps the focus on the singer. Brother Jerry Lee stops by for a duet on “Baby (You’ve got What it Takes,” a fun, loping number just right for dancing. That 1965 recording also leans a bit in the direction of Phil Spector, with three guitars and a saxophone filling out the sound. (He’s not credited on piano, but that’s almost certainly Jerry Lee on the ivory glissandos.)

Bill Justis is the arranger on Linda’s reading of “Jim Dandy,” and it swings hard. Kris Kristofferson’s weeper two-step “My Heart Was the Last One to Know” is very much in a classic country mold, but Lewis proves she’s every bit as at home with that material as with the more rocking tunes. And by 1969, her original compositions were making it as singles. “Louisiana,” “Gather ‘Round Children” and “What is Love” are solid country numbers with keening fiddle courtesy of Kenneth Lovelace (and that’s Hargus “Pig” Robbins on piano).

Jerry Lee is back for “Before the Snow Flies,” one of the collection’s most well-known tunes. It’s a clip-clop country tune, but Linda demonstrates her range and subtlety. Sandy Rhodes is a the oddly out-of-tune piano for Chip Taylor’s “Working Girl,” a slice of quintessential countrypolitan pop. Pig Robbins and pedal steel master Pete Drake are thestars of the catchy “Smile, Somebody Loves You.”

Somewhat uncharacteristically, Robbins plays a Wurlitzer electric piano on “Ivory Tower.” It enlivens the lugubrious melody. (Trivia for rock fans: that’s Bob Moore on bass on this and many other Linda Gail Lewis tracks; he was the father of R. Stevie Moore.)

The saucy “I Wanna Be a Sensuous Woman” is a Linda co-write with Hal Worthington; it has a Tom T. Hall feel. That song and the collection’s last track (“I Should Not Have Fallen in Love With You”) both feature Lida Gail Lewis on piano along with vocals; her instrumental skills are solid.

As Early Sides vividly demonstrates, Jerry Lee Lewis’ sister is very much an artist in her own right, one richly deserving of the success she has enjoyed. And those who appreciate the earliest of these tracks will be pleased to know that her latest album – just released – rocks quite hard. Family Jewels (Live) is well worth seeking out.