EB Davis: Ambassador of the Blues (Part 3 of 3)

For many years as he was becoming a noted force in Berlin’s blues scene, Davis continued his duties as a member of the U.S. Army. Asked to elaborate on his responsibilities, he initially demurs. “I think the documentary can explain it better than I could,” he says. The documentary to which he refers is a 2015 production, How Berlin Got the Blues. This short subject – subtitled The Secret Life of EB Davis – tells the story of Davis’ life, including his move to Berlin, his career as a blues vocalist and band leader, and his sensitive work for the military.

Eventually, Davis relents and opens up a little about his work for the army. “The basic job was keeping the communications open between the Russian generals and the American generals,” he says. “Whenever one wanted to say something to the other, I would transmit it back and forth.” And to the outer world, Davis kept the two parts of his life – the army and the blues – completely separate. But the hidden truth was more complicated than that.

“[The army] kind of encouraged that,” Davis says. “Because [with The Superband] I could travel throughout the East, and that would… serve a double purpose. You know what I mean?” He doesn’t elaborate further, but confirms that he became fluent in German long ago. 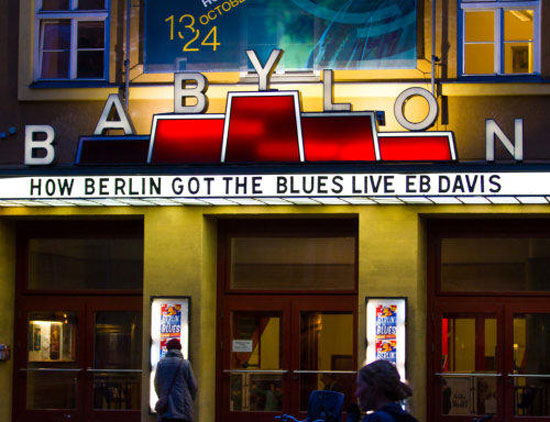 The audiences at those concerts behind the Iron Curtain were a little different than what The Superband encountered back in West Berlin. First of all, the concertgoers were primarily military personnel. “There were some civilians, too,” Davis says. “But they were invited guests. The general public couldn’t just walk into the concert.”

And as each show would begin, the East German audience maintained a reserved character. “I guess that was because of the circumstances they were living under,” Davis says. But once they got a taste of EB Davis and The Superband, that all changed. “Once the music got going, they were jumping around and dancing just like all the rest,” Davis says with pride.

Things changed after the wall came down in 1989, and while reunification was a good thing for Germany, Europe and ultimately the world, not all of the changes in Berlin were positive. “After reunification, a lot of people who didn’t come to Berlin before started coming for a weekend or something,” Davis says. “They saw that there was such a thriving music scene. But what happens with too much of anything is saturation: the soup don’t taste as good as before.” Despite the changes, Davis and his band would continue to find success in Berlin and beyond.

When Davis finished with the military, he was approached by a German record company. “They offered me a nice little contract,” he says with a smile. “So I said, ‘Okay, I’ll stay [in Germany] for a little while because of the contract.’” But, he says, one thing led to another. One of those things was his marriage to Nina. “And after I ended up getting married, I found that I could make a decent living here just from the music,” Davis says. “So I said, ‘Maybe I’ll get it while the getting is good!’” He decided to stay in Germany.

Davis agrees with the observation that across history, Black American musicians have often been received with more honor by European audiences than by audiences back in the States. And he has definite ideas as to why that’s the case. “Let’s take blues, for example,” he suggests. “In Europe, blues is viewed as an art form, which it is. But in many parts of America, it’s not viewed as such.”

There’s even more to it, Davis believes. “A lot of the European audiences like to understand what you’re singing about; they’re interested in the lyrics and what the story’s about. Whereas when we play in America, sometimes it’s just a party.”

From Davis’ perspective, there’s a big difference between European and American audiences for the blues. In Europe, he says with a hearty laugh, “they listen more, and they’re willing to pay more! So that’s two outstanding differences!”

For his part, Davis isn’t a blues prophet without honor at home. “I was playing the King Biscuit Blues Festival in Helena, Arkansas in 2008,” he recalls. “A guy came up to me and introduced himself and said, ‘I’m going to nominate you to be the Arkansas Ambassador of the Blues!’” That same year, he was honored in his adopted home of Germany when the Deutscher Musik Verein (German Music Society) named him Best R&B Singer in Europe.

More recently, when Davis was playing a set at the 2021 edition of that same festival, he was stopped mid-set. “A guy came on to the stage and said, ‘Excuse me: I have to stop the music for a minute, because we have to award you something.’” Then and there, Davis received an Excellence in Blues award.

In addition to a regular schedule of live performances – with The Superband as well as fronting a quartet that often features wife Nina – Davis has recorded and released a steady stream of albums. Discogs.com lists only six – the earliest, a cassette-only release, Asskicking Blues!! dating back to 1995 – but there are at least a half dozen more, plus several live concert DVDs. Davis’ 1996 CD, Fool for the Ladies features tenor saxophonist Big Jay McNeely on two tracks.

Davis and The Superband still gig at The A-Trane; they’ve released two live albums documenting their sets at the Berlin club. And the group remains a fixture of blues festivals across the European continent. Davis believes he knows why the blues today has such a strong appeal internationally.

“Blues is basically a simple music,” he explains. “You don’t have to be a college professor to understand it.” He says that even if – as is sometimes the case with audiences in Europe – listeners don’t fully comprehend the lyrics, “you can understand the feel of it. If you keep it up long enough, you get the feeling from it.” In his travels around the globe, Davis says he hears the same thing. “We’ve played in so many countries, and no matter where we go, there’s somebody saying, ‘Oh, I have a blues band.’”

EB Davis believes that anywhere you go – “even Siberia,” he laughs – you can find a local blues band. “And,” he says, “I don’t really know of any other music that has touched every corner of the world the way blues has.”