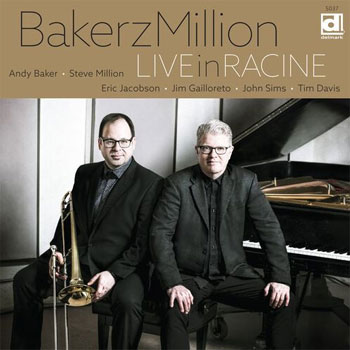 While it is unlikely ever again to have a fan base on par with its 1950s-’60s heyday, hard bop jazz remains very much alive. And even with all manner of recording technology advancements, the way to hear hard bop is live and in person. There’s a thrilling interactivity that comes with experiencing the music as it’s created, on the fly and in real time.

But the next best thing is a well-recorded live album documenting such a performance. And that’s exactly what Live in Racine is: a six-tune set of inventive, spirited instrumental jazz from a six-piece band that draws upon Art Blakey’s Jazz Messengers for inspiration. As its name telegraphs, BakerzMillion is co-led by trombonist Andy Baker and pianist Steve Million. This set, recorded live in February 2018 is an enthralling audio document.

Rather than leaning into standards and using them as a creative jumping-off point, BakerzMillion serves up an all-original set featuring for tunes form Baker and two from Million. The compositions are true to the aesthetic and spirit of classic hard bop, and the interplay among the musicians is crackling with electricity.

The lengthy opener, “Bluesish” showcases Million’s playing, but everyone else shines as well. “Bay Steps” is mellow and contemplative, and features some lovely and understated soloing from trumpeter Eric Jacobsen. “Eisenbleu” is a bossa nova-flavored showcase for Jim Galloreto’s saxophones. “Softly” reprises thee subtle and quiet approach. But the splashy “Second Hand Smoking” leans hard into the groove. And the six-piece presents itself as a (small) big band on the swinging closer, “State of the Estate.” A fine set start to finish, Live in Racine is sure to delight hard bop enthusiasts.