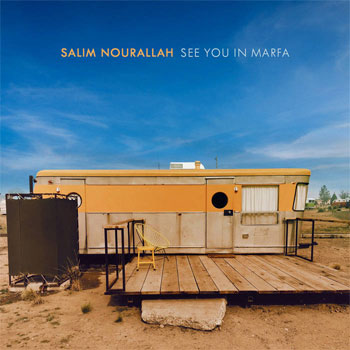 Salim Nourallah is from Texas, but for See You in Marfa, his project collaborator is the great Marty Willson-Piper, former guitarist for The Church and a superb musician, singer and composer in his own right. The album was recorded in Nashville, with Willson-Piper’s guitars (on two tracks) cut in the southwest of England.

The five tunes have a folky, Americana/heartland rock spirit that calls to mind Tom Petty, Old 97s and Pete Yorn. The arrangements are uncluttered and straightforward, and Sourallah’s warm and inviting voice is mixed nice ‘n’ out front. There’s a pleasant, easygoing jangle to the title track, one that leaves the listener unprepared for “Not Back to Sad,” featuring electric piano and wonderfully unnerving stabs of what-is-that.

Willson-Piper guests on “Hold On to the Night,” a bouncy, upbeat tune with a Sgt. Pepper vibe. He’s also present on the acoustic-based “Love’s a Promise,” but fans of The Church are warned against expecting any of the Australian band’s textures. The electric guitar – when it’s even audible – is subtle to the point of is-it-there? But set aside who’s doing what and you can simply enjoy a lovely tune. (Some points deducted for Sourallah’s voice cracking repeatedly on the bridge. I’m guessing it’s intentional, but it doesn’t work for me.)

The rock-leaning songs are front-loaded on this five-song EP. “Hate the Waiting” follows on with the subtlety; it’s the sparest tune on the whole set, and while it’s nicely executed, there’s more of the vocal cracking here. With the songs sequenced thusly, the net effect of See You in Marfa suggests the sound of an artist running out of steam. As a concept, that’s nothing short of interesting, but I am left wondering. Still, this EP is an intriguing way to spend 16 minutes and change.