Geriatric Jukebox: The Sounds of (Near) Silence

It’s often been said that a message can be communicated more effectively with a whisper than a scream. That’s part of the philosophy of Geriatric Jukebox, a wife-and-husband musical duo that performs classics from pop’s golden era at venues across Western North Carolina. Jean and Alan Satz moved from New York to Hendersonville seven years ago, and quickly became immersed in the region’s open mic community; that led to the couple launching Geriatric Jukebox in 2018. I caught up with them between gigs for a chat. 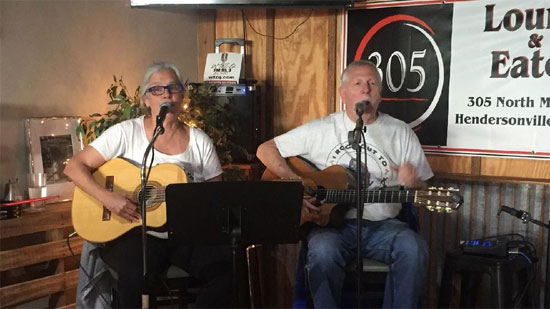 How did you get started in local open mic events, and how did that lead to your musical duo?
Alan: Jean and I sang in New York in a folk meetup group. When we came to North Carolina, we got involved in a non-amplified round robin at The Black Bear. Then we took part in one at Jongo Java. Eventually the guy who was running it couldn’t do it anymore. So we took over hosting that for about a year and a half. When Jongo ceased to be a coffee shop, we moved it to The Black Bear where it was [subtly] amplified. Jean got a chance to sing in front of a microphone. It took me 28 years to get her to do that! And we haven’t stopped since.

You have a repertoire of 850-plus songs. Do you know them all from memory?
Alan: No, no. We’re one of the few bands in town that embrace our mistakes. We tell people: “We’re the Geriatric Jukebox. We get to sit down, and we get to make mistakes!”

Do you ever fail to “read the room” and play songs that don’t go over with the audience?
Alan: It happens. A couple years ago, as a favor to a friend, we played to an older [than usual] audience. We didn’t have quite enough songs from the late ‘40s and early ‘50s. What we thought was applause was a guy falling out of his wheelchair!
Jean: He’s kidding!
Alan: I am kidding. But we were probably 10-15 years out of date with them; we’ve remedied that.

What’s the most unusual thing that has happened at one of your shows?
Alan: We specialize in Jean playing the kazoo and, during “California Dreamin’,” she’ll play the flute solo on it. Unbeknownst to us, quite a few people bought their own kazoos to 305, and they played along with us. We actually give them out now; we buy ‘em 50 at a time.

Tell me about the Geriatric Jukebox band name.
Alan: We bill ourselves as the quietest band in town. We ask the audience if we’re too loud, because we’ll cut it back. We don’t necessarily want to be heard above your conversation.

What do you enjoy most about singing and playing together?
Jean: Somebody actually wrote on Facebook, “You sing the songs of my life.” It makes us happy; it’s like a ministry for us.