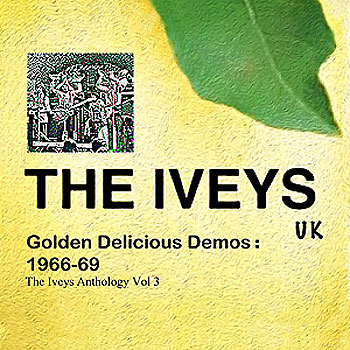 Badfinger fans (and perhaps a handful of others) know that when that group was signed to The Beatles’ Apple Records, they were still known as the Iveys. Their first single and sole LP were released – albeit just barely released – by Apple bearing The Iveys name. And the group at that point did not yet include Liverpool guitarist Joey Molland; he joined part way through the making of Badfinger’s Magic Christian Music LP.

The Iveys left behind a comparatively slim body of work: that LP was pretty much it. But thanks to original member Ron Griffiths, this new collection brings together demo recordings from the group. And the staggering depth of creativity that would manifest as Badfinger is here, either hinted at or already on brilliant display.

Twenty tracks cover both well-known songs (“Maybe Tomorrow,” a demo of the group’s single) and obscure fuzz-rocker-meets-vocal cuts like “I’m Too Shy,” a track reminiscent of early Bee Gees. Some of the tunes edge a bit toward what the British call twee: “She Came out of the Cold” is lovely enough but hardly a rocker. “Man Without a Heart” is lilting Merseybeat.

But Pete Ham’s bouncy “Taxi” is Rubber Soul– style pop, albeit with a perhaps too-chirpy vocal refrain. Notably, this set features original songs from the pens of Griffiths, Ham and Tom Evans, underscoring the point that as great a songwriter as Ham would turn out to be, he was among the ranks of at least two other fine composers. Evans’ “Apron Strings” is reminiscent of Grapefruit. And “I Believe in You, Girl,” is a stunning piece of work by Ron Griffiths, fusing hard-edge rock (a la The Move) with tight vocal harmonies.

A few songs that wouldn’t surface until the Badfinger era appear here in demo form. “Midnight Sun” features Griffiths rather than Ham on lead vocal. “Carry On Till Tomorrow” is fairly similar to its finished version. And a compilation of demos of “Without You” is nothing if not fascinating, illustrating the unique song components that Ham and Evans each brought to the song.

These recordings are demos, so listeners should approach them with that in mind. The fidelity is fine for what these are, but approaching Golden Delicious Demos as a standard release is likely to disappoint. It’s an historical artifact, and a highly listenable one at that. And while it’s essential listening for Badfinger aficionados, it’s a worthwhile listen for anyone interested in UK pop of the late 1960s.