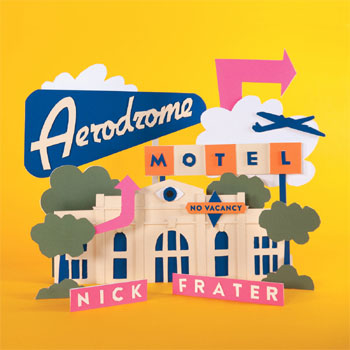 Nick Frater is a remarkably prolific artist; in recent months and years he seems to be cranking out new music at a furious pace. And his quality control program is well in place; he clearly holds his work to a high standard, and potential listeners are all but guaranteed that each new release will be worth their time.

With that in mind, there’s not a great deal for me to say beyond letting readers know that Aerodrome Motel, Frater’s latest, does nothing to change my opinion of Frater and his work. Even while managing a busy schedule that includes playing in Love Revisited’s touring lineup, he’s crafted another lovely collection of winning pop-rock tunes. Frater’s gift for melody, his ability to seamlessly place sharp hooks into fetching tunes, and his skill at arranging are all showcased on Aerodrome Motel.

The album’s credits list is long and varied, but it should be noted that Frater is at the core and foundation of every cut, singing lead, playing (guitars, bass, keys, percussion etc.) as well as engineering, mixing and producing the entire affair. And after all that, it sounds like a band, not a guy with a home studio and loads of MIDI.

The opening cut, “The Pleasure is Mine” is pure Frater, but keen listeners might detect hints of anything from Jellyfish to Pilot to Supertramp in the song. He rocks things up on tunes like “Love Heist,” but those indelible pop values are always the main ingredient. Subtlety is the defining chracteristic of the gentle title track, one reminiscent of Emitt Rhodes. “No Hard Feelings” is a dreamy, melancholy number filled with emotion.

True to its title, “Rough & Tumble” has a hard-charging brass arrangement wedded to a solid melody. Think of it as a pop-leaning cousin to The Saints’ classic “Know Your Product.” The mid-sixties Beatles styled insistent piano vibe – you know the one – shows up on “Dear Modern Times,” with bits of Mellotron for extra points. “American Expressways” feels a bit like 10cc, and that’s never a bad thing. The disc concludes with “White Courtesy Telephone,” combining atmospheric Britpopsike with some Pet Sounds and SMiLE sonic textures (and even a bit of pedal steel).

Inevitably, this album is shortlisted for consideration for my annual best-of; check back in late December if such things matter to you. If you’re already hip to Nick Frater’s musical world, go get Aerodrome Motel. If you don’t know his work, his latest release is a perfect entry point to discovers the wonders therein.